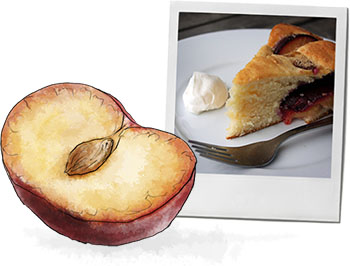 Back in London on the annual pilgrimage to the US Embassy to have my visa re-issued.Â Back to sleeping in my childhood bedroom, where creeper is already turning red around the windows, and I can watch the birds gathering in the branches of the holly tree, waiting for general consensus that itâ€™s time to fly south.

Anyway, flicking through the book I happened upon a quotation that Iâ€™ve always had a soft spot for; â€œThere are few hours in life more agreeable than the hour dedicated to the ceremony known as afternoon tea.â€

I had it written on a mug at one point. Perhaps if I keep excavating through my bedroom Iâ€™ll find that too.

I first discovered this delicious cake on Food52, and made it in the height of summer with the juiciest plums I could muster up from the Union Square farmers market. It was such a success â€“ and super easy – that I started to make other versions; with peaches, with one plum per cupcake, with blackberries. And I started to play around with the idea of adding herbs and spices â€“ mint with the peaches, cinnamon with the blackberries. Finally, triumphantly, I replaced some of the flour with ground almonds, which seem to keep the cake moist for longer â€“ though this is still best eaten fresh out of the oven.