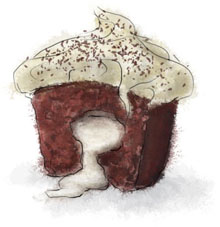 Halloween would not be halloween in our house without oozing pus chocolate cupcakes.

On the grounds that anything you do more than once on a holiday can be called a tradition, these are especially traditional – I’ve been making them since our first American halloween; the one where we learned about the parade for the first time by trying to catch the subway in the village, being laughed at by a cop and told to walk to Chelsea.

We could not believe the exuberance, the enthusiasm all around us.

Jon recalls Halloweens in Scotland. “We’d go to our neighbours’ houses and say trick and treat, then we’d do our trick (using the old meaning “turn, party trick”) and get given a treat. I literally had no idea you were supposed to give kids candy or they’d squirt silly string on your lawn.”

“So what was your trick then?” I asked him.

“I recited a poem. Then I got given an apple and a box of raisins.”

Like I said, we could not believe our eyes when we saw the full force of Halloween in NYC.

“You’ll need a lot of candy,” said friend Susan. “Think about how many apartments there are in your building, now think about how many have kids in them. All those kids will trick or treat you, and they’ll all take a handful of candy.”

We filled a bucked with mini snickers. The children were very polite and only took one each. We were eating mini snickers well into the new year. But it was fine. More than fine. Children swarmed up and down the corridors. Buzz Lightyears, Princesses, Cowgirls, a serious-looking turtle. Amped up on chocolate.Â RevelingÂ in mischief. Happy as clams.

These cakes do that for adults.

They’re molten white chocolate truffle cup cakes by any other name, and the warm white chocolate really does ooze pus-like from the centre when they are cut open – the perfect end to an adult Halloween party.

5 oz chocolate (just less than 2 bars)
Â¼ cup plus 1 tbsp butter
3 large eggs
3 large egg yolks
Â¼ cup of sugar
3 tbsp flour
8 – 12 white chocolate truffles (I usually use the Lindt Lindor ones that are sold individually at the checkout in my local supermarket. They are especially oozy)Â
Â

Top with whipped cream and grated chocolate or rich red-brown coco powder, and consider adding Baileyâ€™s to the cream for a decadent touch (about 1 Â½ cups of cream would do it)

This entry was posted in Uncategorized and tagged baking, chocolate, cupcake, halloween. Bookmark the permalink.