This Dinner Will Get You Laid â€“ Pumpkin Lamb Stew â€“ with optional eyeballs (full disclosure â€“ the eyeballs will almost certainly not get you laid.) 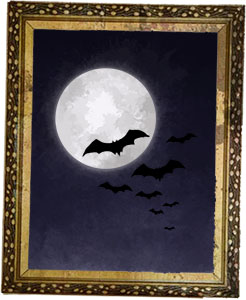 Seriously. Cheese and crackers is plenty. This post is not for you.

But I am dressing up as the mini Darth Vader in the car advert, so I will have to try a little harder (is this costume any cuter than last year’s Chilean miner? Possibly.)

Since having Halloween on a Monday this year brings the whole weekend into play, Iâ€™m thinking dinner party as well as dinner a deux.

Simple green salad with walnuts, blue cheese and cranberries, tossed with a little balsamic and olive oil. (Iâ€™m serving this on individual plates and hiding a plastic spider on each one.)

Now the lamb stew is darkly elegant. It really is. So it’s a bit of a shame that I thought about the eyeballs really, and that having thought about them, I just couldn’t help myself from including them here and lowering the tone. 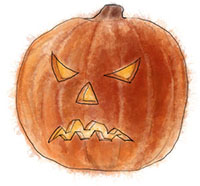 Iâ€™m using a pair to garnish the stew, so when I take the lid off the pot at the table, Iâ€™m making a Halloween statement. Itâ€™s just for fun, though of course theyâ€™re edible. Iâ€™ve eaten them myself as a matter of fact, in a Chinese restaurant in Flushing. And they were fine. Not gourmet delicious, I must rush back and eat them again, nothing will satisfy my craving! But fine. In a foamy, chewy sort of way. And they certainly add a gross-out touch to the stew, which you may or may not want. A Halloween dinner party with a group of friends? Sure. Dinner for two by the fire, pre reading ghost stories and sipping red wine by candlelight? Probably not.

This recipe comes from a page that I tore out of the Sunday Times Magazine some (10?) years ago, written by Tom Norrington Davies. Iâ€™ve been making adaptations of it ever since, mainly because I spilled red wine on the bottom of the recipe and canâ€™t exactly read what it says.

Iâ€™m sure though that he would not endorse the whole eyeball business, and I can assure you, that part is all me, all my fault. Sorry Mr Norrington Davies.

The sweet pumpkin and the sweet lamb make it a very comforting spoon fed kind of supper. I make it a lot on cold weekends, when Jon and I sit on the sofa watching Poirot and eating out of bowls. But for entertaining, I use lamb shanks, which have more of a sense of occasion about them. Also, bones, which is always good for Halloween, I think.

This entry was posted in This Dinner Will Get You Laid and tagged eyeballs, halloween, lamb, lamb shanks, pumpkin, stew. Bookmark the permalink.