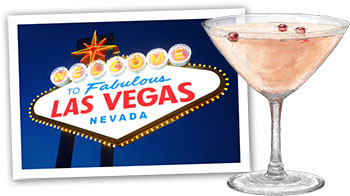 One year, Jon and I abandoned traditions that we hardly even knew about yet, and spent Thanksgiving weekend in Las Vegas.

We found $40 rooms at the Luxor on the internet, where they threw in free gaming lessons and a pile of free chips. Given that Jon was brought up more or less Quaker and I was brought up emphatically Methodist, holding the pile of chips was almost thrill enough.

Now Jon had some previous experience of cards. His grandmother, while bed ridden with pneumonia, taught him to play whist so he could play games with her. Having mastered the basics, she went on to pass on a legacy of cheating that secured him ill gotten honor and glory.

Even so, Vegas was a bit of a shock. Vegas at Thanksgiving even more so than regular Vegas would have been. Pilgrims wandered amidst the Egyptian themed gaming tables. Vodka ice luges in the shape of turkeys graced the buffet. My frozen cocktail came in a hollowed out pumpkin with a green straw.

So it was not a traditional Thanksgiving by any means, although we were extremely thankful for it.

This white cranberry cosmo is not a traditional cosmopolitan – itâ€™s got a little razzle dazzle. Razzle Dazzle on a scale of cosmopolitans that is â€“ itâ€™s no frozen pina colada in a hollowed out pumpkin.

White cranberry juice has a sweeter tang, and a lovely pearly color that’s perfect for floating a frozen cranberry or two in keeping with the holiday spirit.Â They’re something of a tradition in my house now â€“ on the basis that anything you do for more than 2 consecutive years can be called a holiday tradition. I tend to use lemon vodka, though if you only have regular vodka thatâ€™s fine too â€“ up the lime to taste.

1 measure white cranberry juice
1 measure lemon vodka
Â½ measure Cointreau
3 frozen cranberries
Good squeeze of lime juice â€“ I use about half a lime per glass, but I like my drinks pretty tart
Â

These wontons are much easier to make than they are to describe really â€“ and have the added advantage of tasting exceedingly naughty and deep fried, when actually theyâ€™re baked, so the kitchen smells of Thanksgiving loveliness, not hot fat. They can be made in advance and left in the fridge on baking trays, ready to heat up when needed.

This entry was posted in The Wednesday Tipple and tagged butternut squash, cranberry, cranberry cosmopolitan, Thanksgiving. Bookmark the permalink.