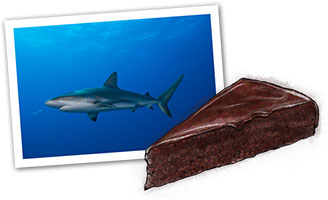 Leaving Gorilla Coffee the other day some friends and I found ourselves strolling in step behind a dad and an eight ish year old kid. The kid took a sip of his drink and let out a sigh. â€œLife is totally unfair,â€ he said. â€œAll I want is a shark. Just a small one. I really donâ€™t see the problem here.â€

My friend Amy tells me that she was like that for a pony when she was little. It was everything she desired. Â Drawing on this youthful heartache she has devised a concept that she calls The My Pony Problem.

â€œYou know when you have a problem, but most of the rest of the world would kill to have such problems. Like, youâ€™re running late to meet a friend at a wine bar because the line in Whole Foods was so long. What youâ€™re really saying when you show up and blurt out your excuse is â€œmy pony was a bit sick.â€ So tonight for example, I have to go to a birthday party, but Iâ€™d sooner go home and watch Castle. Basically, “my pony is lactose intolerant.”

Back in Brooklyn the kid who wanted a shark found sympathetic ears on James. â€œI wanted a shark when I was a kid,â€ he said. â€œAnd my Dad actually got me one. It wasnâ€™t exactly a real shark, it was a fish that looked just like a shark. They never grow much beyond 8 inches. You have to keep them in an aquarium, but they look exactly like sharks, and they kick goldfish ass.â€

The sunny day, the coffee with friends, the shark talk, there was so much to be grateful for. And where there is gratitude to be expressed, chocolate cake usually facilitates.

I wanted to make an old fashioned Americana-style chocolate cake for Kimâ€™s Mad Men party, and this recipe from Loaves and Fishes, which uses a can of Hershey chocolate syrup, fits the bill. This batter makes for a fairly thin disk of a cake. If this is something that bothers you I suppose you could make two and stack them. Itâ€™s worth noting that this cake can be made up to a week in advance of you using it if you wrap it carefully in plastic wrap and keep it in the fridge. Ice the day you want to eat it.

The chocolate icing is from an Ina Garten recipe. Once the cake is iced she warns that it should not be refrigerated. Iâ€™m not sure quite what this would do to the icing, but Iâ€™ve always heeded her warning and it always tastes delicious.

For The Cake
Â 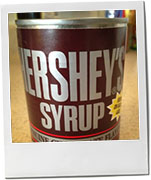