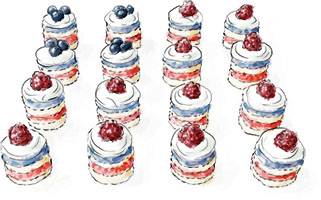 When do things become a tradition? I made the first flag cake for Susanâ€™s 4th July BBQ when I was new to New York and probably should have realized that making a cake in a tin larger than my oven was not going to be the most fun way to spend the hottest day of the year.

The next year, word spread, and requests for Flag Cake came in. Older, wiser, smaller flag cakes in disposable foil tins â€“ basic sheet cakes topped with white icing and decorated with the customary lines of blueberries and strawberries / raspberries.

Another year, another batch of Flag Cakes. Mixing things up, just for variety, I added a few handfuls of red and blue fruit to the batter itself â€“ pretty, pretty easy, nice idea.

This was Flag Cake lite â€“ easy all in one cake batter, limited mess, limited fuss. But even that was not without drama.

This was the year that my Mum and Dad and I missed the last ferry to New Jersey, where the party was being held, cadged a lift through the Holland Tunnel and trekked down the hill and along the shore from Hoboken to Weehawken, the heavy layers of cake cutting through the flimsy bottom of the disposable tin and cutting into my arms, so that by the time we arrived for burgers and fireworks, I looked as though I had lost a battle with a feral cat.

Not that this is a tricky cake to make â€“ by no means. Itâ€™s an all in one cake batter (though you could use a box mix if you prefer – we’re using food coloring to dye cakes, the gourmet ship has well and truly sailed) – divided, colored and baked, sandwiched together with an easy butter cream. 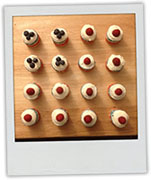 6 room temperature eggs
12 oz soft butter
12 oz sugar
12 oz flour
1 tsp baking powder
1 tsp good vanilla extract
Food coloring in red and blue (I use pastes)
Milk â€“ about 2 tbsp
1 half sheet pan
2 quarter sized sheet pans (or whatever you can reasonably manage â€“ I have one of each and wash them up between mixes, which takes longer, but totally works out in the end)
Â 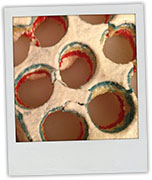