Latkes, bullies, a dragon and a My Little Pony 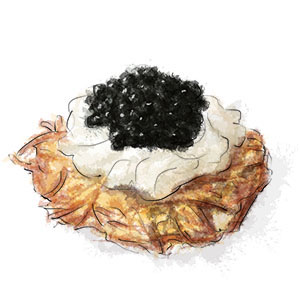 When Jon and I go for our Saturday morning excursions into New York to forage for coffee and bagels, we occasionally pass a local middle school. This school has a distinctive mural painted by the kids on the playground wall, and the subject of the mural changes a couple of times a year. At the moment, it spells out a strong Anti Bullying message. â€œBullies are Bad,â€ it reminds us.

This sentiment is illustrated in Technicolor by happy kids and sad kids, by flowers and rain. And by a dragon flaming a My Little Pony.

â€œWhat the hell?â€ wondered Jon, as we stopped, frankly a little taken aback, to stare.

â€œIs that dragon bullying the My Little Pony? Or is it retaliating because the My Little Pony bullied it? Maybe the My Little Pony was all â€œIâ€™m purple and pretty and youâ€™re just an ugly old dragon,â€ and picked it last for team sports out of spite, even though, come on, itâ€™s a dragon, it would probably have been great at sports. In which case, big mistake, My Little Pony. Your flowing pink mane and tail are totally synthetic. Iâ€™m saying youâ€™re a molted puddle in moments. Ha!â€

He paused for breath. Clearly, the art had had its intended affect, and unleashed a deep seam of anti bullying passion in my normally mild mannered husband.

â€œStill,â€ he added, â€œIâ€™m not sure what the message really is here. Is it ok to flame someone who bullies you? Is that really what this is saying? What do you think?â€

Rosti usually involve both grating and frying â€“ both of which can seem like a step too far, I know. And honestly, boiled new potatoes cut in half lengthwise and smothered with sour cream and caviar are a delicious alternative. But Iâ€™m looking for crunch, so I persevere.

And while I canâ€™t think of a short cut for the grating â€“ though a food-processor will do the job, providing the grater attachment can be located, by which time it would usually have been quicker for me just to grate the potato in the first place â€“ but the frying? Totally.