Iâ€™ve been perfecting my lychee martini recipe in anticipation on Sneak Like A Ninja Day, which, of course, Iâ€™m sure weâ€™re all celebrating on December 5th.

Itâ€™s one of my favorite parties of the year â€“ lychee martinis, sushi for the Ninjas and pizza for the Ninja Turtles. Then we sneak.

Youâ€™d think a lychee martini would be a fairly innocuous sort of drink. After all, look at it. Itâ€™s got an air of sophistication, of exoticism, or elegance, even. But in my experience of cocktail hour no other single drink has been responsible for so much disaster and carnage.

Ella started drinking them at our Sneak like a Ninja party in Warsaw Poland, and woke up the following day on a train in Gdansk. And here in New York, Marc was sipping restrainedly one moment, the next writing a giant sign with his phone number and a suggestive cartoon on it and holding it up in the window so that Pants Man (opposite building) could read it.

The problem, I suspect, has been too much sweetness â€“ the more lychee syrup, the easier they are to drink â€“ and theyâ€™re pretty much neat vodka. So Amazing Grace came over for a taste test, following which neither of us woke up in a different city or on YouTube in our knickers, which we consider a success.

Grace, you might remember, hooked up with a stranger who she got chatting to on a park bench â€“ though, and this has become something of a mantra for her of late, weâ€™re all strangers to each other at first, arenâ€™t we? And over the weeks Alex has gradually become integrated into our lives. We went with Grace to hear him play jazz, which could have been a lot worse â€“ Jon said he actually enjoyed it. We drank apple martinis with the extra test-tube shot at the Dallas Barbeque and ate onion loaf at midnight. We borrowed his electric drill to put up a curtain rail. And now, weâ€™re friends.

â€œHow do you know when youâ€™re in love with someone?â€ asked Grace, a couple of test martinis in.

Around the time that you start to wonder, perhaps? 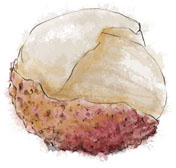 Can of lychees
Vodka from the freezer
Edible flowers

(If you prefer a long drink, pour into a tall glass and top up with lemonade.)

Couldnâ€™t be easier really. I buy them frozen, I throw about a Â½ a cup per person in a pan with a splash of boiling water from the kettle. I let them come to the boil for 30 seconds then I drain them and throw over a very generous sprinkling of salt and a small pinch of sugar. Toss and eat.

This entry was posted in The Wednesday Tipple and tagged edamame, edible flowers, Grace, lychee, martini, ninja, sneak like a ninja, vodka. Bookmark the permalink.