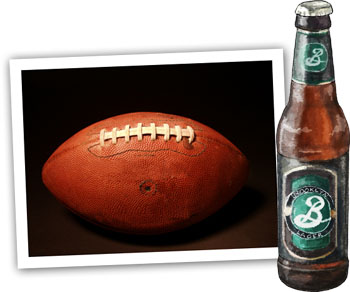 Super Bowl is almost upon us. Which is cause for great joy and celebration in our household â€“ itâ€™s another of those fantastic eating holidays that we missed out on for years through ignorance and being British.

We first discovered the party when we were living in Warsaw Poland. Some ex-pat American friends invited us to join them at a local sports bar at 1 in the morning to eat burgers and watch the game. It was the most riotously joyful midnight feast Iâ€™ve ever been to. Plus I won $50 by picking a random name in the first touchdown sweepstakes.

Like a convert to a new religion, I celebrate Super Bowl with zeal and fervor â€“ over the years Iâ€™ve even been able to work out what makes Football different from Rugby, and whatâ€™s going on on the pitch.

So here is my tribute to Super Bowl snack time â€“ with the perfect tipple â€“ a bottle of local beer.

Dip is a big deal amongst my friends. Even ones who use their ovens for storage and donâ€™t know which way round to hold a vegetable peeler (yes, Iâ€™m thinking of you Adam), have strong culinary opinions on dip.

They reconstitute it from packets. Often, this tastes appalling. It reminds them of their childhoods, so they eat it with joy and alacrity. Sometimes they move in a 0â€“90 in 2 seconds gourmet direction. They buy expensive mushrooms, they borrow a blender, they expound on the importance of fresh thyme. Then they scoop it up with Doritos.

So I am throwing my hat into the wildly competitive dip arena, with this easy caramelized onion effort â€“ itâ€™s a big step up from a packet, but not so rarefied that youâ€™re scared to dip a kettle chip in it.

These darkly glazed sticky ribs are always a crowd pleaser â€“ and itâ€™s somehow extremely satisfying to use a whole bottle of coke to create a relatively small amount of gooey glaze. Donâ€™t use diet coke. I tried it, and the ribs tasted of chemicals. Very odd and a bit spooky when you think about it. Itâ€™s enough that one of us put the thought â€œI know, letâ€™s make a ribs, only a bit more dietâ€ into foolish action.

These taste fried, but are actually baked, which keeps the kitchen smelling good, and makes life much easier if youâ€™re feeding a crowd. They can be made a day or two in advance and heated up on Game Night. 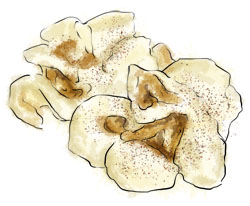