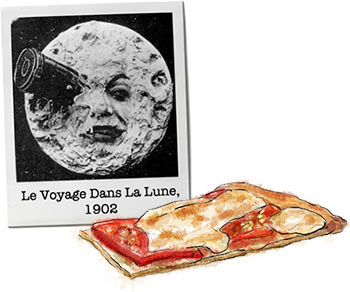 Given that a giant NASA satellite is about to hit the earth, now might be the perfect moment for serious thought, some sober and appropriate reflection. Possibly even philosophical or religious musings.

“Let’s go to the movies Annie!” I said to Jon as we picked up enough tickets to last us all night at the IFC box office and headed for the popcorn.

“Let’s go to the movies Annie!”

“Um Jon? Yes, I know that. It was on the marriage certificate for one thing.”

“Great. Singing. In public. Great. So this must be the musical?”

“Yes, the musical. Annie’s never been to the movies, and there’s this big song and dance number where they go, and it’s super glamorous and awesome. It’s iconic. And they all sing Let’s go to the movies Annie!”

“I am a boy. From Scotland. Why would I have seen Annie?”

“That is going to change.”

Can I strongly suggest some truffle butter popcorn in addition to the pizza?

If you live near a Trader Joes or an amenable pizzeria, buy a ball of pizza dough. Oil a banking tray and dump out the dough onto it. Press it out as much as you can, then leave it alone for a few minutes. Poke it and stretch it out again. Give it another few minutes. Poke it out again – it should be about the sixe of the tray now, and very thin – then proceed with the toppings. 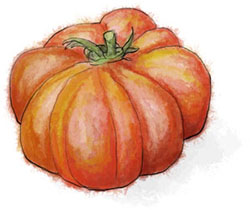 3 cups flour (I use 00, though if you want to use something more adventurous, half white half whole wheat perhaps, you may need a little more water)
1 packet of dried yeast
1 tsp sugar
1 cup warm water
1/2 tbsp salt
2 tbsp Olive oil
Extra flour for dusting and extra olive oil for oiling

1 baking tray of spread out pizza dough
1 cup of cherry tomatoes
1 cup basil
enough heirloom tomato slices to cover the pizza – so about 3 large tomatoes, or goodness only knows how many smaller ones
1 ball mozzarella
salt and pepper
olive oil

This entry was posted in This Dinner Will Get You Laid and tagged basil, caprese, cherry tomato, heirloom tomato, mozzarella, pizza, tomato, vegetarian. Bookmark the permalink.