Roast Sausages with Chianti and Grapes 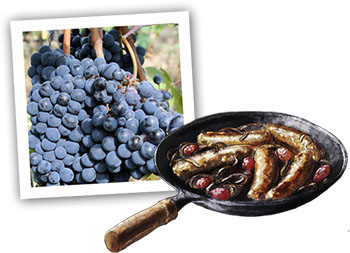 Back in New York, and back to work, with my new fancy London clothes in my newly re-organized Fall wardrobe. Primark. New Look. BHS. All the really great iconic designers feature.

“I love that dress,” said the woman in the elevator. “I’ve been looking at it in Sacks.” So, evidently, had the designer for Matalan who kinda sorta maybe totally ripped it off.

When I worked as a script editor part of my job was to track down new writers for the show and read submissions of scripts from agents. Often these were incredibly dull, sometimes vaguely illiterate, sometimes totally ripped off from The Young Ones. And then there was the phenomenon of the Talking Fish.

It’s not an obvious idea for a tv drama. And yet time after time, week after week, talking fish scripts would land on my desk. Over the course of 4 months, I had enough to start a folder for the category. It was a lot.

They all followed the same basic idea. A fish is caught. It is a talking fish. It predicts the end of the world. Drama ensues.

At some point the guy (it’s always a guy because of the having to go fishing as part of the set up, I expect) has to keep the talking fish a secret from his girlfriend or she will think that he is crazy with a capital K and dump his ass. Often, she drains the bathtub and leaves the fish to flounder at the point of death until either a) it talks to her too or b) (more common) the guy saves it in time. For various reasons the world does not end, the guy gets to stay with his girlfriend. The fish goes back into the sea.

Probably every single writer who came up with this was impressed by the ingenuity of the idea, the mythic overtones, the total uniqueness of the story. I will stand out from the crowd with my talking fish script, these writers probably thought. And the folder kept on growing on the side of my desk. It really was a strange little quirk in my job.

So I am open to the idea that convergence occurs. That there is a time and a place for something and the very rightness of the notion can strike several people at the same time. My sister (in London) and I (NYC) both sent my husband the exact same birthday card, for example.

Nevertheless, it’s still strange to me that 3 of my friends were invited by guys to dates at 100 Acre last weekend, and were seated one next to the other in a row, (all with slightly different reservation times) and spent the night pretending not to notice each other.

It makes me wonder how many other people are having Chianti themed dinner parties this weekend too?

Roast Sausages with Chianti and Grapes

Two things to note here; firstly it’s worth going to a great butcher and getting a really good sausage. I use a mixture of sweet and spicy Italian sausages so people get a bit of variety. Secondly, choose a pan to fry the onions in that’s going to be big enough to fit in all the sausages later. I use a cast iron le Cruset. Totally worth the work heaving it out from under the bed, where it lives in my very small apartment.

If you want to serve something along side in addition to the grape focaccia, soft polenta really hits the spot.

This entry was posted in This Dinner Will Get You Laid and tagged chianti, grapes, roasting, sausages. Bookmark the permalink.