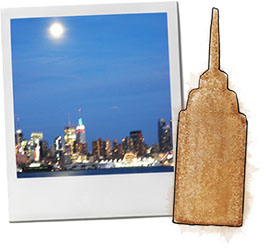 The Christmas party was in full swing when someone suggested that we all go and check out the “awesome penthouse with the million dollar views” that was currently for sale in the building.

Apparently, before she moved out, the neighbor next door who we’ll call Sue, just because clearly she’s behaving illegally, had discovered that it was empty, carded the lock and had a good snoop around, possibly using the fridge for overflow over Thanksgiving, and storing a bike in the second bedroom.

That Sue had broken and entered a penthouse came as no surprise to me. The woman had form.

4th of July, she broke into an empty rental apartment, this time on the ground floor, so that people could use the bathroom during a firework viewing party. “You have to pee in the dark,” she told me, my mother and Hilary, “but it’s worth it not to have to walk up the stairs.” This is debatable.

Back to the party, we were keen as mustard to see the penthouse, and filled up our glasses to sneak over there in the dark. Floor to ceiling windows greeted us, looking straight across the river back to Manhattan. It’s an insane view. It really is. We drank limoncello cocktails and gazed at the lights. People were quiet, just standing and staring at the city.

“It never gets old does it?” said Jon.

So though it’s exciting to be flying home tonight for London and Christmas with our families, it’s good to know that New York will be waiting for us when we get back.

A few Christmases ago I was given a set of cookie cutters shaped like famous New York landmarks. So I make gingerbread Empire State Buildings, then pretend I’m Godzilla, demolishing them. Probably that’s more information than anybody needed to know about me.

Suffice it to say, any cookie cutter shapes will do.

Ice with confectioners sugar mixed with lemon juice to form a thick paste – and theme according to the Empire State lights, using M&Ms if you feel so inclined.

This entry was posted in The Monday Treat and tagged Christmas, cookies, gingerbread, New York. Bookmark the permalink.