The Wednesday Treat – Tom Collins, and a side of cupcakes

Is there any way to eat a cupcake outside the context of a birthday party without feeling just a little bit Sex and the City?

I am a member of a writing group, which mostly means that we meet up every couple of week and moan and bitch to each other about how well or not well our various projects are going, argue about the Oxford comma again, then rush home, inspired by fear, jealousy and cocktails to write feverishly into the night.

Walking to this writing group’s bar of choice takes me straight past Magnolia Bakery. You would think that you’d first be alerted to the presence of Cupcake Royalty by the perfumed aroma, the vanilla scent drifting half way down West 11th street. But no. Mostly it’s the noise. And mostly, what the serpentine line of women, bored boyfriends and gay teenage boys are screeching to each other runs along the lines of; “No, you’re a Samantha, I’m more of a Carrie!” and “Did you know, statistically speaking, Charlotte was the one who had the most sex?”

And I’ve always thought, if I ever walk past that store and there’s no line, I might just pop in and buy a cupcake. There always is a line, of course. Weaving my way home I peer in through the windows and wonder, who are all these women buying cupcakes at 11.30 at night?

Last week, odd fluke of nature, an oddly modest line, so waited my turn and bought a box to take to the bar. We sat around our regular table, having the same conversation, only this time, our lips were frosted with pink icing. “We are Carrie right now!” said Neil happily. “We should order cosmos.”

“We can’t be writers eating cupcakes in the village and drinking cosmos,” noted Karen. “What if, for example, Darren Star walked in and saw us and we lost all credibility forever?”

It was a point. “What’s the least Sex and the City drink we can have?”

But since none of us had the stomach for Guinness with a shot of tequila in it, the barman’s suggestion, we had Tom Collins’s instead. 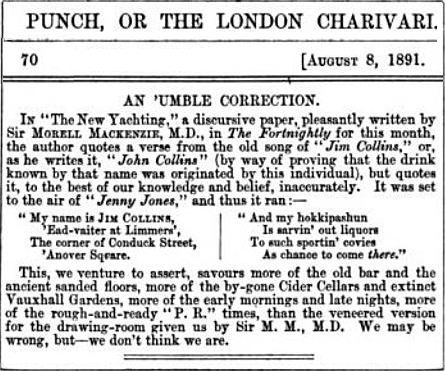 This entry was posted in The Wednesday Tipple and tagged cupcake, gin, lemon, Sex and the City, soda, tom collins, writing. Bookmark the permalink.