Trifle for a Jubilee Party 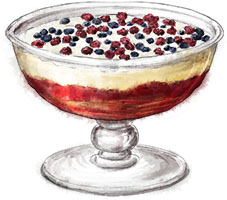 Itâ€™s the Queenâ€™s Diamond Jubilee, and my Mum had a busy schedule planned, full of BBQs, fireworks and street parties. Â “Should be fun!!” she texts, and I send her :)s and try not to be jealous. It must be like this to be an American in London on 4th July, and say to people, â€œBut itâ€™s July 4th!â€ and for them to look back at you and say â€œso?â€

So for people who have no idea what I’m talking about, the facts are these: the Queen has been Queen for 60 years.Â BritainsÂ will celebrate by eating cake. And here are some facts for people who totally knew that already:

And so I carve out a little British envlave in the heart of Manhattan, where bunting, cake, scones, crumpets and tea from a tea pot are the order of the day. Vivat Regina and all that.

Itâ€™s practically a patriotic duty to have a proper afternoon tea. After all, if weâ€™re going to beat the official Golden Jubilee celebrations, we need to get through more than 160,000 cups of tea, 54,000 scones, and 48,000 slices of lemon and chocolate cake.

And to crown the occasion, a proper trifle â€“ this one decked out in red white and blue.

My Grandma is a Master of trifles.Â Twice a year she makes a couple of dozen individual trifles to sell at the church market. Many of these are in fact pre-sold before the event to people who know that if they want one, they need to get in there early. She soaks her trifle sponges in raspberry jelly – you make up a jug of jelly, add a few handful of fresh raspberries and once it’s cooled down a little, pour it into the bowl over the sponge. Let it set and proceed with the custardÂ business.

Since she hit her 90s, my Grandma has been using Birds Custard powder, or, if she’s being fancy, M and S custard in a pot. She tells me that there have been no complaints from the customers at the Upholland Methodist church. Take that as you will.

This trifle serves 6 – 8 people, and is easily doubled for a crowd. It can be made in glasses if you prefer individual portions – which is easier for a buffet line, you just grab and go, though that’s less dramatic than a glorious billowing bowl.

This entry was posted in This Dinner Will Get You Laid. Bookmark the permalink.