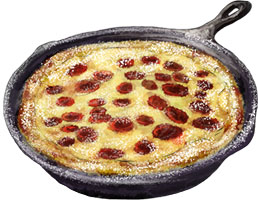 Itâ€™s a throw back to my childhood, but whenever I eat cherries I line up my pits on the side of my plate and count them up with the rhyme â€œtinker, tailor, soldier, sailor, rich man, poor man, beggar man, thief.â€ Apparently this is some kind of folkloric way of predicting the kind of man that you will marry.

Now Iâ€™ve eaten a lot of cherries in my time, and none of them came up â€œphysicist,â€ so make of that what you will. A quick poll of my friends highlights the limits of the rhyme. evidently Iphone App developer, Lyricist and Hedge Fund Manager were not considered the marrying types by poets of Yore, (though, thinking about it, â€œrich man,â€ probably covers at least one of those).

The only friend of mine who married either a tinker, tailor, solider, sailor, rich man, poor man, beggar man, or thief looked at me askance when I started counting cherry pips – she’d never heard of such nonsense. Which is a shame really. Because she was briefly married to a thief, and this might have saved her some grief.

My Mum loves cherries and used to buy bags of them for us to eat in the car as we drove from school to recorder lessons or swimming lessons or drama club or Guides.

“There’s another verse,” she’d say, “something about getting married in calico or cotton or something …” That did not significantly clarify matters.

Last Summer she visited me in New York where they are on every fruit stand in the city, for the kind of lose change you can rustle up from the bottom of your handbag. We walked up the Highline park with our paper bags full of cherries, chatting about nothing, summer all around us. 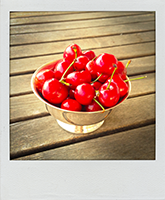 This recipe is adapted from Le Petit Cafe’s pear clafouti recipe, featured in Daniel Young’s Paris Cafe Cookbook, which I generally read in bed to facilitate dreams of sitting outside a bistro with a glass of lillet watching the world go by. It’s a little cakier than some other recipes which is why I love it.

If the thought of stoning 1 Â½ to 2 cups of cherries is too much, you could use thawed frozen cherries