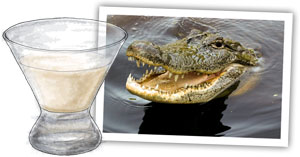 Among the many myths about this great city of New York, one of the most enduring is that of crocodiles living in the sewers. Over the summer this story was given a new lease of life when a crocodile / alligator / largish gecko was sighted looking suspiciously at a man-hole cover somewhere in Brooklyn. And now new statistics confirm it; potential sightings of toothy lizards in New York have increased by a third â€“ thatâ€™s a lot â€“ over the last five years. Is a colony breeding voraciously underneath the city into a secret army, hopped up on whatever spooky chemical waste is sloshing about down there, amassing superpowers, ready and waiting to strike?

Make of that what you will.

But at my office another urban myth has been the topic of the day.

M has seen him with her own eyes, she says. The Man Who Owns A Penthouse On The Top Floor.

She was working late. Popped out for a sandwich and met him in the elevator on her way back up. He had a cat under one arm, a bottle of bourbon under the other, and, even though she wasnâ€™t really staring at him, he clearly felt the need to explain that this was less strange than it looked; that he lived in the building in the penthouse on the top floor, and his cat had made a desperate bid for freedom and the bright lights of Park Avenue. He was retrieving said cat, returning to said penthouse to drink said bourbon. Nothing strange about that at all.

M was understandably impressed; kind to animals, drinks good bourbon, and, most saliently of all, owns a Penthouse.

But in the cold light of day, under the scrutiny of the office, the myth began to unravel.

Who owns a penthouse on the top of an office building anyway?

In addition to which, we work on the top floor. Could there really be a penthouse above us that we have been unaware of until now? A quick count of the exterior windows would suggest not, unless it was set back on the roof so as to be invisible from the road.

Backing up this theory, the elevator stops at floor number 12. Our floor. Though, in the interests of honesty, there are 5 elevators in the lobby. Some of them might stop at the penthouse. I have not been in all of them. Though if they did, why would Penthouse man be travelling in our elevator with his cat and his bourbon and not his elevator?

Is it possible that this is some elaborate scheme to pick up women? It totally worked on M, whoâ€™s had her head quite turned at the thought, but really, why go to such elaborate lengths in a city where women outnumber men 2 to 1, and itâ€™s really anyoneâ€™s guess how many of those men can be excluded from the straight dating pool on grounds of sexual preference, or playing online role playing games too often, or liking knives a little too much? Walking into a bar wearing smart suit would be easier.

So what was the mystery Penthouse man doing? Why travel around a random office building with a cat â€“ though I suppose if thatâ€™s the plan for the night, the bourbon rather speaks for itself.

The lady who re-stocks the coffee machine had an idea. The building is old. And therefore, possibly haunted. And â€“ get this – it used to be an apartment block, so itâ€™s possible that itâ€™s haunted by someone who used to live there, probably someone whose runaway cat drove him to excessive drink. And – what do you know – people in the office now confess to having felt irrational chills. Previously these had been explained away by an over active air conditioner programmed from central office in Florida, but now weâ€™re beginning to wonder. The supernatural explanation feels more plausible.

Itâ€™s cold outside, I just had a birthday, there may well be crocodiles the sewers that could swim up the toilet and leap out! And my office might be haunted. Drink seems the most rational response.