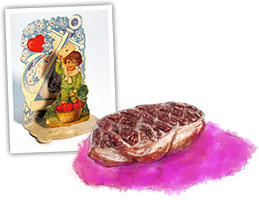 The first Valentines Day that I spent with the man I ended up married to was, not to put too fine a point on it, awkward and uncomfortable.

It was fairly early days in our relationship, and we had not said â€œI love youâ€ yet. We were 19 year old cynics. And this left us with a problem: to observe Valentines would be odd, but not to observe it would somehow be even more pointedly odd.

Valentines day arrived and Jon handed over a classic red card reading â€œBe my Valentineâ€. Cleverly, no mention of the L word, yet still highly appropriate for the occasion. Good choice.Â I presented him with a green envelope containing a purple note card. The sentiment had taken soul searching and a thesaurus to put into words; â€œI appreciate you.â€

Luckily, Jon burst out laughing at the expression of my lukewarm feelings and the rest is history. The fact that I could cook probably helped.

This recipe comes from a cafÃ© in Paris called Brasserie des Deux Palaisâ€™. I came upon it in a wonderful book by Daniel Young, who noted that because it is situated opposite the Palais de Justice, â€œthe cafÃ© counts among its regulars some of Franceâ€™s most distinguished judges, lawyers, politicians and career criminals â€¦ Due to its central and therefore neutral location between two river banks and four arrondissements, the cafÃ© is a diplomatic rendezvous for estranged partners in love, business or crime.â€

I have spent longer than I like to admit daydreaming about sitting at a white tablecloth-ed table, drinking lillet and watching the clientele of Brasserie des Deux Palaisâ€™ go about their lunches.

This red cabbage puree is classic French cooking – the perfect side dish for a Valentines steak dinner or alongside of piece of duck breast. A bonus, of course, is the color; the addition of crÃ¨me fraiche or sour cream turns the purple cabbage vivid pink. 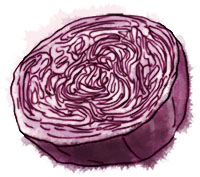 To turn this dinner into a Valentines feast, consider making this easy pot au chocolate for dessert.

This entry was posted in This Dinner Will Get You Laid and tagged duck, Paris, red cabbage, rendezvous, romance, steak, Valentines Day. Bookmark the permalink.