This Dinner Will Get You Laid – Slow Roast Duck for Chinese New Year, and a question; do you have a type? 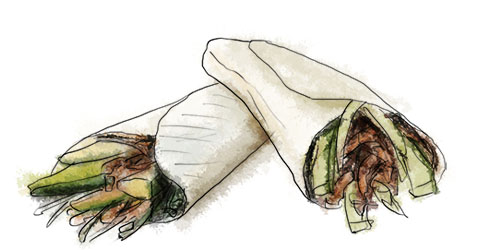 Through the wonder of the internet, my friend Jen has discovered a disquieting fact about her ex boyfriend: â€œhis new girlfriend looks exactly like me.â€

This, ladies and gentlemen, is the true legacy of facebook.

Like Hugh Hefner to a peroxide blond teenage bikini model twin, some people are drawn to a type.

When I was at school I had a friend who only dated guys if they were Irish, 15 years older than her, and, very important, owned their own car. Now, I have a friend who dates a gamut of men, as long as they wear suits and are called things like Donovan or Hamish, and, most importantly, own their own apartment.

Yet another friend constantly brings interchangeable younger women who play guitar and sing in alternative bands to parties. Heâ€™d want me to note in fairness, that some of them are blond, some brunette, and one was Balinese. So they do sometimes look a little different from each other, you know, in that kooky, vintag-y, Topshop-y, I wear glasses even though I don’t need them way that makes them in fact all look exactly alike.

As far as dating goes, I am emphatically not a person with a type. I married a tall, handsome man who looks like a younger LL Bean catalogue model. I fancy both Russell Brand and Ian Hislop. No. Itâ€™s not pretty.

But when it comes to Chinese New Year, I am unable to consider alternates.

I will be eating slow roast duck. Sure, there are buns this year, not pancakes. But thatâ€™s just owning a 2 bed on Lexington rather than Madison, being a hipster who wears tortoise shell rather than black glasses. It fools nobody.

1 whole duck â€“ for two people youâ€™re looking for a small duck, a bit smaller than a chicken. Obviously for more people, get a bigger duck or roast 2. I either buy my ducks in China Town, or from www.culverduck.com. Remember that leftovers are going to be awesome and desirable.
Â½ a hot house cucumber
5 scallions (spring onions)
Jar of plum sauce
As many packets of buns or pancakes as you think youâ€™ll need â€“ Iâ€™d go with 4 per person, plus extras. Too many is no problem. See leftovers.
1 tsp five spice powder
Â½ tsp salt
1 tsp cinnamon
Â½ tsp ginger
Â

This entry was posted in This Dinner Will Get You Laid and tagged buns, Chinese New Year, duck, panckaes. Bookmark the permalink.

2 Responses to This Dinner Will Get You Laid – Slow Roast Duck for Chinese New Year, and a question; do you have a type?