The Wednesday Tipple – a Steadier, for frazzled nerves and catastrophe 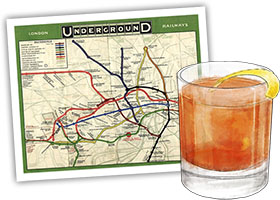 One of my first jobs was working as a runner on a hidden camera prank show. The kind where the producers convinced paintballers that they were being recruited for MI6 so the televisionÂ viewingÂ public could laugh at them.

Basically, we messed with peoplesâ€™ Karma, and we should have been prepared for the consequences.

My job this particular day was to take the tapes to the processing studio in Soho. This was a good task because I would be out and about in London, I could listen to my walkman, I could get some French fries. All good.

But as I ascended the escalator at Oxford Circus it suddenly dawned on me; the bag of tapes was not in my hand. The never to be captured again drama of the person reacting to the news that the woman heâ€™d just let jump the line at the grocery store was the shopâ€™s 1 millionth customer and had just won a huge check, was lost. Still on the underground.

The station manager saw me and took me into his office. â€œI will be fired for sure, but thatâ€™s not the worst of it. This drama is lost forever!â€ I explained somewhat melodramatically.

â€œItâ€™s worse than that,â€ he noted, helpfully. â€œYouâ€™ve left an unidentified bag of black boxes on a train. People are going to think itâ€™s a bomb. This is a major security risk. Major.â€

The train was stopped. The train was searched. The tapes were nowhere to be found. The two trains either side of my train were stopped and searched just in case. No bag.

I had delayed all of London. And I still had no tapes to show for it.

Surpressing terror burps I headed back to the office. I would have to lie, that much was obvious, â€œI was mugged! The tapes were stolen from me!â€ And then I would resign honorably. The words were forming on my lips as I walked towards the producerâ€™s desk.

And saw the bag of tapes sitting on my chair. I had forgotten to take them with me.

Then I really did faint. And was sent home for the afternoon, where I thought about what I had done.

This entry was posted in The Wednesday Tipple and tagged bitters, brandy, drama, lemon, lost tapes, steadier. Bookmark the permalink.

2 Responses to The Wednesday Tipple – a Steadier, for frazzled nerves and catastrophe