The Wednesday Tipple – Frozen Mint Juleps and The Lucky Day

My Mum and Dad were visiting New York, and we took a side trip out of the city to see what we could see and have lunch. What I saw was a four leaf clover, right in the middle of a grass verge by the sidewalk.

I donâ€™t know how I spotted it. My family will tell you that, to me, Whereâ€™s Waldo is one of lifeâ€™s great mysteries. But spot it I did. I stopped. Bent down. And picked it.

â€œThatâ€™s very lucky,â€ said Mum, who admitted that up to this point she hadnâ€™t really believed they existed. â€œWhat are you going to spend the luck on?â€

The idea of luck as currency appealed to me. What should I spend my luck on? It would take some thinking about.

â€œLottery ticket,â€ said Jon when I showed him the now limp leaves over a delicious dinner at Clearwater that night. â€œPick a nice big jackpot, kiss the lucky clover and win big.â€ 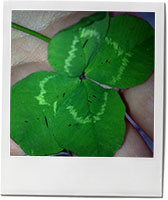 â€œIâ€™ll think about it,â€ I said, carefully slotting the clover into the back of my notebook for safekeeping, as though it were the worldâ€™s most useful and magical gift certificate.

On the way home a black cat walked in front of my path.

Let me reiterate: I was on a path. A back cat walked in front of me. In a city of apartment dwelling felines, this is a singularly unusual event.

â€œThatâ€™s it. Weâ€™re totally having a bet on the Derby,â€ said Jon.

We walked back to the flat to drink coffee and look at photos. People that I love I the city that I love. And I felt extremely lucky, clover, cat or no.

I love this description of how to make a traditional mint julep, and if you consider yourself a purist, I recommend that you heed the writerâ€™s advice. But this version is the version that I actually prefer to drink. Extra frosty, extra minty, with no annoying mint bits in the teeth â€“ and itâ€™s easy to make a pitcher using the same basic proportions. 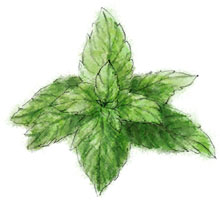 For the mint sugar syrup