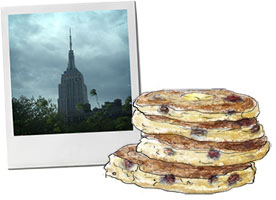 A friend of mine had been to Space Camp as a child and had described the experience as â€œabsolutely no question the best week of my life, made up of the best days of my life!â€

She gave him a withering look. â€œHoney, itâ€™s clear you have never been to Space camp.â€ So when my cousin Alex was invited to go to Florida and learn about rockets with his friend Oliver, I was beyond excited for him, and promised to meet him on his return to NY, and make sure he caught the plane back to the UK.

Back from Space with the pictures to prove it, Alex and Oliver were full of the experience. They had built and launched rockets, rode in simulators, spun upside down in an anti gravity globe, led a space mission, and won a team prize. In their down time, theyâ€™d fished, watched a baseball game and driven go-karts. What New York could possibly offer two ten year olds that wouldnâ€™t be a tremendous let down after that?

Oliverâ€™s mum Amy had the right idea. Apple products and Lego. The morning was a huge success, but what to do after lunch? My friend Jess had the answer; â€œCome to my office and Iâ€™ll show you round.â€

Normally when people make you an offer like that, itâ€™s best to say no as politely as you can, but Jess works in the Empire State Building, so we were there â€“ well, I was there, and the boys were there, and Amy took the opportunity to be child free and drink coffee. Smart lady. 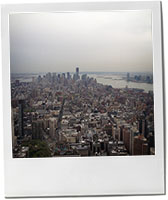 Jess bussed us past the queues and ferried us up to the viewing deck to see New York spread out before us like a giant Monopoly board.

The boys collected quarters and hit the binoculars, while Jess and I caught each other up on our lives. Love, loss, jobs, irritants, ball games, decorating tips – the minutiae of living, against a background that could best be described as epic. Which pretty much sums up how I feel about New York in general really.

â€œItâ€™s almost like seeing the city from Space,â€ I said out loud, not knowing any better. â€œAlmost,â€ agreed Alex as politely as he could. â€œIf the Empire State Building was like a hundred times taller.â€ 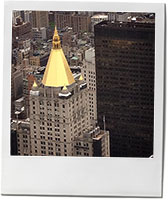 We took the boys to a proper American diner, where they had the opportunity to quiz Uncle Jonathan (physicist) who had not finished his first cup of coffee of the morning yet, about all things black hole and cosmic ray related. â€œHow many galaxies are there that you would say are nearby?â€ The more pancakes he ate, the more he enjoyed this conversation.

My buttermilk pancake is a variant of a Martha Stewartâ€™s classic, and the method is pretty much the same, only I cook my pancakes in oil rather than butter, which I always seem to burn before the Â pancakes are done.