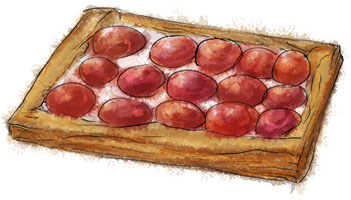 True Romance with a capital R. My friend James has abandoned his Brooklyn apartment, handed in his notice at his job in an office off Union Square, and will move to Paris forthwith, to be with the woman he loves.

He seemed a little apprehensive, sure, â€œI am going to miss the Japanese food and the burgers, Iâ€™m not going to lie,â€ but ultimately confident that heâ€™d made the right choice.

â€œI canâ€™t wait to be there with her. Iâ€™m going to spend the summer relaxing, eating great food, drinking great wine, going to French cinemas and running along the Seine,â€ he told us when we asked him whether he would miss New York in the staggering heat and humidity of August, when the city can overwhelm all but the most dedicated urbanites.

Obviously it helps that Paris is involved. You rarely hear of people talking happily about their courageous romantic decision to move to Wigan, for example, or Detroit, however â€œtotally gorgeous, like a model, and stunningly clever and funny and really sophisticatedâ€ the person is.

And so in the spirit of French romance, this summery goat cheese peach tart â€“ and for â€œpeachâ€ you could just as easily substitute figs or nectarines or plums or pears â€“ whatever is fresh, ripe and good.

I usually serve this with a salad as a main course (serves 2 – 4) or a starter (serves 6), though add 1 tbsp of warmed honey as a glaze at the end and a sprinkle of slivered almonds and you could call this dessert, and feel terribly sophisticated.

I use store bought puff pastry because I had to make puff at cookery school and life is too short to repeat the experience. I use Pepperidge farm, or Trader Joes own brand â€“ both of which are great, and when I lived in the UK I used Just Roll.

This entry was posted in This Dinner Will Get You Laid and tagged entertaining, goat cheese, Paris, pastry, romance, rosemary, tarragon, tart, vegetarian. Bookmark the permalink.