The Wednesday Tipple – Lillet Fizz, and a toast to absent friends in Paris

My friend James had made the boldly romantic decision to leave his life in New York and move in with his girlfriend in Paris.

And recently he had acquired an ornate handcrafted Mexican Devil Mask. 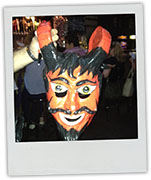 The plan was to take the mask with his to his girlfriendâ€™s apartment in the 11th arondissement, where she would surely appreciate it. The problem was that it would not fit in the suitcase. Too many Barcade T-shirts probably. Nor would it fit in hand luggage, crammed as it would be with Marshmallow Fluff, peanut butter already swirled with jelly, honey mustard pretzels, and other products that, for sure, would not be available in France.

He thought about wearing it, but decided that, given US airport security these days, it would probably be a terrible idea.

â€œLeave it at my office,â€ suggested a friend, â€œand Iâ€™ll send it via internal FedEx to our Paris office and you can pick it up from there.â€

Which explains a lot about the state of our economy, frankly.

So with his Devil Mask safely handed off, and his cases packed, James stepped into a taxi and drove towards the expectation of a glittering Parisian love life. Just like that, he was gone.