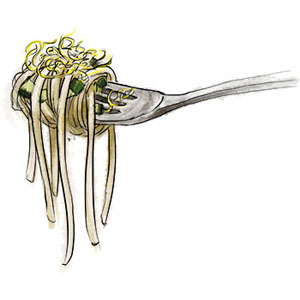 Everybody needs a hobby â€“ for me itâ€™s a close tie between magazining and singing. For John, triathlons. For Tabitha, designing dog Halloween costumes and selling them on Etsy. As it turns out, Jonâ€™s Boss has a hobby too â€“ albeit a somewhat accidental one â€“ a talent for growing enormous vegetables.

Hereâ€™s a picture of the zucchini that Jon staggered home under the weight of yesterday. 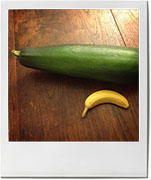 The banana is for scale. Seriously. Itâ€™s that big. Tell me thatâ€™s not the kind of vegetable designed to put fear into the hearts of fete contestants in any British village.

â€œItâ€™s got to be a marrow,â€ I said, disbelieving. But itâ€™s not. That Glennys had managed to cycle into work with it in the basket of her bike is nothing short of a miracle.

Itâ€™s impossible to look at this kind of seasonal harvest without feeling lurking metaphors. We plant, we wait, we reap. Sometimes we get enough zucchini to feed a whole Physics department, sometimes, nothing. Thatâ€™s the thing about Autumn symbolism, however fruitful it seems, the flip side always brings a touch of melancholy.

Maybe thatâ€™s why a carrot growing a nose, or a suggestively shaped parsnip delight us so â€“ now, more than ever, we need the humor.

This entry was posted in This Dinner Will Get You Laid and tagged cream, giant vegetables, harvest, lemon, pasta, penne, vegetarian, zucchini. Bookmark the permalink.