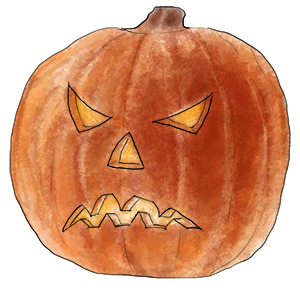 Last week, we took my visiting parents to Blaze, a pumpkin festival in a somewhat mythical place that city-dwellers refer to as “upstate”, which turns out to be about an hour out of the city near Sleepy Hollow. It is a common urban-living fantasy to rent a car, and head “upstate” for the day to see fall colors and eat apple cider donuts, both of which we did.

As night fell, we headed under the glowing pumpkin arch, hot apple ciders in hand, and began to explore Blaze, a magical series of tableau constructed entirely out of pumpkins, glowing warmly into the cold dark. It was about as Fall as Fall gets, really. Unless you’re eating pumpkin soup. In which case, that’s as Fall as Fall gets.

Serves 4
1 can of pumpkin
1 tray of pre cut up squash (or half a small squash tat youâ€™ve peeled and de-seeded and chopped yourself like a grown up)
1 large onion
2 cloves garlic
1 can chick peas
1 can chopped tomatoes
1 handful ditilini pasta (the very tiny kind)
4 cups of spinach or kale â€“ something green and leafy
+ pretty much any CSI vegetables you want to get rid of, cut into similar sized pieces as the squash. Not by any means necessary to add extra veg, but pleasing.