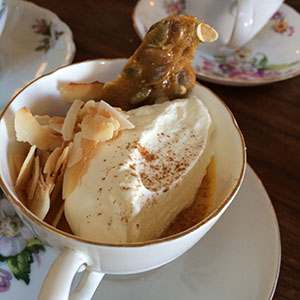 Think pumpkin pie, but creamier, and without the faff of pastry, and you’re thinking panna cotta. The perfect Thanksgiving-y treat, but one that seems generally Fall, not specifically just for Thanksgiving, which is always pumpkin pie’s limitation.

I first made these back in late September, for our friends Dan and Jen’s baby shower. On my list of things to be thankful for this year are all the babies that we have lavishly showered. And that means, I’ll blow my own trumpet here, I think we’ve got the hang of throwing a good baby shower party – a large, comforting Mac N Cheese, with little bowls of bacon, mushrooms, pickled onions and tomatoes to add in, a fancied up salad, (in this case, with toasted pecans and cranberries) and some kind of dessert in the mismatched china cups that I sourced from Goodwill.

This latest baby shower, for our friends Jenny and Dan, had an autumnal bent, which suggested something pumpkin-y in the cups. Not mousse (raw eggs), not a custard (not sure if the cups would survive being baked in the oven), which left panna cotta, always a third choice because of the gelatin, which seems like a step too far â€“ though, every time I actually make it, I wonder why I was bothered by the gelatin in the first place. It really isnâ€™t a deal breaker, just a little bit of soaking required.

So I bought the pumpkin (in a can) and set to work â€“ not a whole lot of work. Around 15 mins, one pan and one blender.

One of the very best ways to eat Fall.

Makes 6-8 servings, depending on the size of your ramekins / teacups

Some other decorating flourishes: