This Dinner Will Get you Laid â€“ Sailing into Manhattan 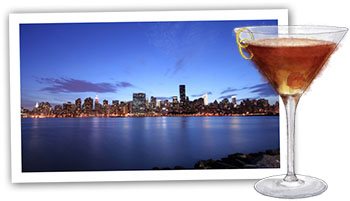 I left Manhattan in the cold â€“ the kind of cold where the wind is gritted with ice as it roars down the avenues. But Iâ€™ve returned to New York in the snow, smothered under drifts of white, so I had to stump to the bar in my boots to meet my friend Bob the costume guy, whom I found in reflective mood.

â€œThis used to be a sailorâ€™s barâ€ he told me as we took our drinks to a table tucked away in the corner in the warm.

â€œIt might still be a sailorâ€™s bar for all I know. But back in the day, that was a kind of code. I used to come here sometimes. There was a beautiful drag queen who used to play the piano and sing Gilbert and Sullivan. It was a scene.

I was in the navy once. Did you ever know that?â€

â€œSeriously?â€ The thought of Bob, so at home with trimming and velvet and beading and brocade bracing the main stays and avast-ing andÂ  yo-ho-ho-ing was incongruous to say the least.

â€œIt was the draft for Vietnam. I knew I didnâ€™t want to go into the army, no way, so I joined up for the navy. They had by far the best outfits too.

Iâ€™d moved to New York and was working as a dancer at the time, though, I wasnâ€™t exactly Fred Astaire. And I had this romance with a beautiful boy â€“ well, we were both beautiful boys then â€“ who was auditioning left right and centre to be a singer. And he couldnâ€™t be in the draft because he had a limp or one leg shorter than the other so heâ€™d march and just keep going round in circles, I donâ€™t know.

Well I started my training, and I was tired, dog tired, all the time. And I kept waking up in the morning with bruises on my legs. I just didnâ€™t know what was going on. It turned out I was sleep walking, so they sent me to a clinic for two weeks to sleep and get monitored, which is about the best kind of navy training you can get. Anyway, the long and short of it is sleepwalkers are not welcome on navy ships. I guess we might walk off the plank by accident. So I was honorably discharged and sent home.

I sailed into New York a few days before New Years. It was cold, as cold as this. We all got up early â€“ about 5, I think, and we stood there, watching Manhattan emerging from the dark. As the light got greyer we could see the city, touched with snow, towering out of the water. There were ice chunks floating past the ship, I remember, and when they moved the reflection of the lights rippled. And my face felt as though the wind was slapping into it with wet rope, but I didnâ€™t move. It was, well, it was beautiful. Vietnam was behind me, the year was ahead of me. I was going to be a dancer. It was the start of life.

When I got off the boat, my friend, the singer, was waiting for me. Heâ€™d taken the morning off from his job â€“ I think he was working in a shop â€“ and he came to meet me off the boat. It was about 9 by that time, and heâ€™d been waiting since 7. He was chilled through. And so was I. So we went to a bar and sat by the fire, and had a stiff drink. And it was the first time that New York felt like my home.â€

Later, I asked him if he remembered what he drank. 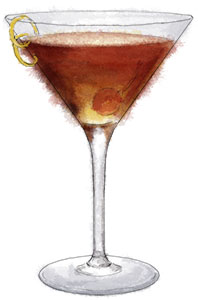 Shake over ice then serve

This entry was posted in This Dinner Will Get You Laid and tagged bitters, Bob, cocktail, Manhattan, Maraschino cherry, sailor, vermouth, whiskey. Bookmark the permalink.