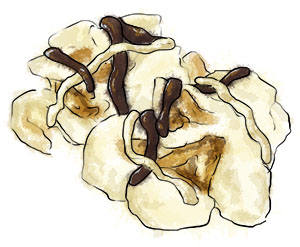 Itâ€™s Oscar Week, which brings out conflicting emotions: excitement to see the dresses, and guilt that I havenâ€™t seen the movies.

This year has been worse than usual â€“ Iâ€™ve only seen the 1. Social Network. Really enjoyed it. Couldnâ€™t believe the actor playing the twin wasnâ€™t a twin.Â  Still. Thatâ€™s not an impressive commitment on my part to experiencing the best that cinema has to offer.

So my heart was full of good intentions when my friends Wendy and Jess proposed a night out that involved a flickering screen and a vat of popcorn.

We could go and see Black Swan. We like dance films. Like Step Up. That sounded promising.

â€œNo,â€ said husband Jon. â€œBlack Swan is not at all like Step Up. Not even like the darker and more gritty Step Up 2 the Streetz. It will give you nightmares, which means you wont get any sleep, which means I wonâ€™t get any sleep.â€

Even though Iâ€™m British I havenâ€™t seen The Kingâ€™s Speech (Iâ€™m hoping nobody at the Consulate finds out). But Wendy and Jess had both seen it, so that was out too.

127 hours? Well, we all knew what happened in the end, and it was hard to get too worked up about the twists and turns of the narrative journey. The Fighter didnâ€™t seem entirely girlâ€™s night out appropriate, Inception sounded a bit too trippy, and the super worthy choice, a special screening of 3 of the Oscar nominated documentaries was, believe it or not, Sold Out.

And that was that.

Nothing wrong with caramel corn. Nothing at all. But I naturally gravitate to salt rather than sweet in my popcorn choice. Luckily my husband is of the same mind, which makes us entirely compatible cinema goers. But, as one who considers a handful of roasted peanuts and a square of dark chocolate to be the Platonic ideal for an afternoon pick me up snack, I can attest that this chocolate-drizzled version hits all the right salty-sweet notes.