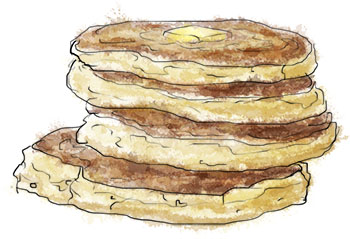 Here in New York, people take their brunch very seriously. And that usually means standing in line outside the latest greatest restaurant of the moment, sometimes for hours on end.

Sunday at Jane the crowd is 5 people deep and the hostess predicts an hour to an hour and a half wait for a table for two. “Put our names on the list” Jon tells her, then we slouch against the wall and divide up the New York Times into manageable chunks.  It could be worse, we reason. It could take well over two hours at Clinton Street Baking Company.

You can judge a neighborhood by its brunch. On the Upper West Side you’d better be in the line by 10.30 if you want to get food before noon. After several lengthy waits and

eventual surrenders outside Alice’s Teacup we eventually worked out a system; Jon would go down and put our names on the list at 10.15. He would collect his buzzer and bring it back up to the apartment, where, on the windowsill, it still picked up a signal. We would read the papers with a coffee in bed until 11.30, shower and change and listen out for the buzz, which usually hit around twelve thirty.

Down in Soho, 11am, no lines, walk right in to Dos Caminos and bag a great table in the garden, but try that trick again at 2pm and you won’t get your breakfast tacos until 4.

Standing around, with nothing in particular to do, it’s not surprising that a lot of interesting communication occurs in lines outside 100 Acres or Cookshop or Pastis. Overheard last week;

“What could I do? The only sensible thing. I hacked into his Facebook …”

“So my friend is dating this guy, and he said he was 35 but he turned out to be almost 50, then he said he had a job but he didn’t and he didn’t have an apartment either, he was just dog sitting for someone. So I Googled him and it turns out he used to be an ice skating instructor, and he got fired from that for stealing. It was in a local paper. So I told her and she was pretty devastated and thought about breaking up with him, but he was good in bed, so …”

Our names are called, we squeeze inside and take our seats, surrounded by mimosa-drinking groups of women, and couples playing footsie under the table. We take sips of our Bellini’s and relax. “The pancakes look good” I say, meaningfully. This is a hint. I’m going to order Eggs Benedict, but if he has the pancakes maybe he’ll give me a taste.  Jon rolls his eyes. “Ok. Pancakes. I love you,” he says.

According to my friend Grace, who’s been happily living in an alternate Romance universe since a conversation with a stranger over lunch on a park bench turned into love over dinner, “the definition of a good date is that you don’t want it to end. Eating pancakes and drinking mimosas and going back to bed for the afternoon are all physical manifestations of this primal desire. i.e. a good sign.”

And for those mornings when even going out for Brunch is too much reality, what could be lovelier than a stack of warm homemade pancakes with fresh peach compote?

My buttermilk pancake is a variant of a Martha Stewart’s classic, and the method is pretty much the same, only I cook my pancakes in oil rather than butter, which I always seem to burn before the  pancakes are done.

For the Peach Compote

3 – 4 fresh peaches (this is a good recipe to use up peaches that are not quite at their ripe glorious best – the heat softens them up a lot)
½ cup light brown sugar
½ cup freshly squeezed orange juice
1 inch lemon peel (made with a vegetable peeler, avoiding the pith)
1 cinnamon stick

Where I like to go for Brunch in Manhattan:

This entry was posted in This Dinner Will Get You Laid and tagged 100 Acre, brunch, buttermilk, Cookshop, Dos Caminos, ice skating, Jane, Lansky's, pancakes, Pastis, peaches, syrup. Bookmark the permalink.