This Dinner Will Get You Laid – Grill Cheese Cheese Burger 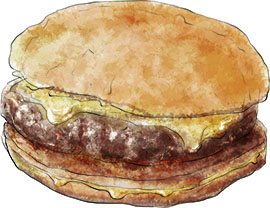 When Euan came to New York he had one goal in mind: to eat and rate all the best burgers in the city.

It was a noble quest, and we set out to help him, compiling a list from various review sites, top ten lists, New York Times clippings and word of mouth reviews. Would Corner Bistro beat out ShakeShack? Had Stand Burger gone off the boil? Would the $26 burger at Minetta really be twenty bucks better?

Now I love a good burger, don’t get me wrong, but 2 days in and I was falling behind the pace. Eventually I wussed out altogether. Who actually orders chicken salad in a burger joint, I had previously wondered. People on day 3 of a burger marathon, that’s who.

But inspired by this experience, Jon became more and more interested in burger nuances. “This would be a Great burger, but an English muffin is not as good as a bun, so I’m only going to say it’s Very Good.”

“Putting the red onion that I didn’t want in the first place under the cheese, so I can’t pick it off without losing half the cheese? That’s an error of judgement.”

I’ll just let that image settle with you for a moment.

“That’s amazing” said Jon. “That’s actually the most amazing thing I ever heard!”

To put this in context; Euan lives in London, so LA is a very long way to go for a burger. And Jon is a physicist with an experiment on the Space Station, so for this to be actually the most amazing thing he’s Ever heard is saying something.

“We’re not going all the way to LA to eat a burger at a food truck” I said. But to avoid being a huge spoil sport, I suggested we attempted to make our own version.

I grilled the patties and got on with the grilled cheeses. And the result was excellent, in a kinda over the top, dare I say it, greasy way. “I think it might be better as a concept than as a burger,” I said. “See it. Call it. Sorry.”

“No.” said Jon. “It’s just going to take some more thinking about. I mean, obviously, the ideal would be to keep some kind of bun rather than having to go to bread for the grilled cheese. Because that way it’s actually going to look more like a burger. But here’s the problem; bread has more structure than the bun and is less likely to disintegrate. And  they need to be smaller, less over-facing. Leave it with me.”

Ever wondered what would happen if academic acumen was re-focused on the concept of a grill cheese burger? 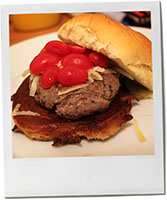 The top sandwich is abandoned. 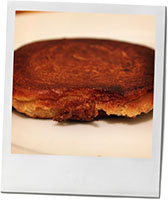 Attempt #3, two burger buns, the two bottoms turned into grilled cheese, the burger topped with cheese, then the top on top. “Good, but still a little bready”

Attempt #4, 1 bun, sliced into 3. The bottom and middle turned into grilled cheese, the burger topped with cheese, then the top on top. “Very satisfactory.” And that was the end of the quest. 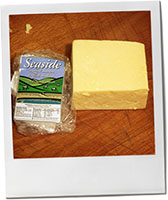 This entry was posted in This Dinner Will Get You Laid and tagged beef, burger, cheddar, grill em all, grilled cheese, grilled cheese burger, grilling, labor day. Bookmark the permalink.