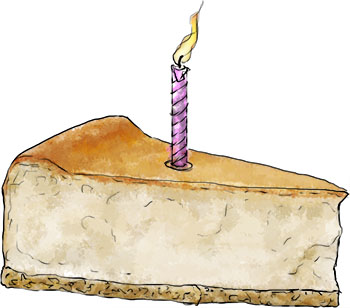 It was my birthday, and I celebrated as I habitually do by going to Chinatown and eating a lot of duck with pancakes. Then back home for champagne and cheesecake and presents. I had a very happy day!

There’s something about cheesecake that seems so celebratory to me. Its golden creamy richness takes decadence to a level way beyond cake cake.

The only cake the comes close for me is the M&S chocolate caterpillar, which is the go to celebration cake in my family, and even then it only comes close then if I can eat the solid white chocolate face and extra smarties.

Though I flirt with non baked cheesecakes and interesting toppings, when it comes to my birthday I want it plain and unadorned. Just perfect cheesecake.

So while I sat on the balcony in my cape, drinking a cappuccino and reading my birthday magazines in the crisp Autumnal sunlight, Jon set out into New York to find it.

I know, you’re probably thinking Katz / Carneigie / some other deli that’s been around since 1900, and this might be a letdown for gourmets, though try to reserve judgement until you’ve tried it; Gristedes sells an awesome cheesecake. All snobbery aside, really, their plain cheesecake is probably my favorite. We live near a Gristedes. Jon went to it. Disaster. They were all out of cheesecake.

Morton Williams had cheesecake, but it was lavishly topped with pinapple of all things, so obviously that was not going to work.

With mounting panic, Jon considered the options, then ran over to Wholefoods, which didn’t have a plain cheesecake on display, but might have one in the back … he returned home with a smug slightly distant smile on his face, mush as Christopher Columbus must have had when sailing back into Southampton eating potato chips and smoking a Lucky Strike.

So my birthday cheesecake was born out of inventiveness and questing. But when I make them for my friends, this is the recipe that I use.

This recipe is a classic Ina Garten one and it’s perfect. She tops her cheesecake with a redcurrant raspberry sauce, which looks delicious in fairness, but doesn’t work for me. I want my cheesecake aggressively plain – well, maybe topped with a birthday candle, but that’s it.

This entry was posted in The Monday Treat and tagged baked, birthday, cheesecake, eggs, vanilla. Bookmark the permalink.