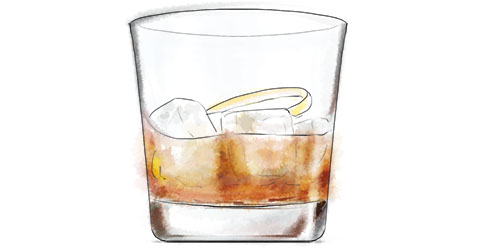 In the chip shop in the town in Scotland where my husband grew up, they will literally batter and deep fry anything. Sausages? Why not. Pizza? Obviously. Chocolate bars? Nae problem.

Honestly, I assumed the whole deep friend Mars Bar thing was a bit of a joke, until I made fun sized versions for a Burns Night party when we lived in Poland, and they were the runaway hit of the night.

The key here is fun sized. Or full sized bars cut into chunks. The size keeps them from killing you.

Raising the tone somewhat, a Scotch Mist is a gently old fashioned cocktail, popular in the 20s. The name alone would be reason enough to make them, but the lemon really does change the taste, meaning that there’s a chance that people who don’t much care for the hard stuff will enjoy this cocktail and feels as though they had whisky on Burns Night, which is, of course, the whole point.

And so, a grace from the man himself on his birthday;

Some hae meat and canna eat, And some wad eat that want it;

But we hae meat, and we can eat, And sae the Lord be thankit.

2 Responses to The Wednesday Tipple – Scotch Mist in honor of Burns Night (oh, and some deep fried Mars Bars)