The Wednesday Tipple – Maiden’s Blush, Stilton Crackers, and something to blush about

Our lives and the lives of our friends are currently divided into the Haves and Have Nots: people who paid the extra for HBO, and people who rely on the goodness and charity of those people to invite them over to watch Game of Thrones.

We do not have HBO, but luckily we do have HBO friends both in Williamsburg and The Village, who will lease my husband sofa space so that he can keep up with the shifting political landscape in Westeros. Nudity, non ironic fur-wearing and fighting – it’s just a regular Sunday night in the neighborhood.

Mostly, I drink the cocktails, eat the snacks, and play with the cats.

“I’m pretty sure the bit where the King has gay sex with the brother of the wife wasn’t in the books,” noted one pedant, after a scene so interesting that I put down my drink and my cat toy to give it my full concentration.

Clearly, this was kinda awesome. But the purists around me were not so sure.

“There’s a lot of weird sex in the books,” Jon noted on the way home, “but I don’t know if adding more sex in general, you know, just as something to do, is really worth it.” Hopefully, he was still referring to the episode.

There are several different versions of recipes for a Maiden’s Blush, not including all the ones you’re thinking of right now that have nothing to do with cocktails. This one comes from the bar of the Ritz Paris, but it’s also totally within the canon to swap out the grenadine for raspberry liquor, and the Pernod for Absinthe. The grenadine gives the drink some sweetness. There are recipes that advocate adding lemon juice rather than a lemon twist, and balancing out the sourness with a tsp of sugar. This is how I like my blushing maidens, so this is the way I make them for lewd fantasy epic television viewing parties.

If you’re drinking basically pure gin, you probably want to serve some kind of snack.

I first made these at a cookery school I went to called The Grange. We made them every week as a way to use up scraps of leftover cheese. Sometimes we’d roll the crackers in nuts. Sometimes not. Evidently, we were pretty free spirited.

When I’m making them from scratch, I most usually use a blue cheese, for a good strong flavor. The classic combination of port and stilton is classic for a reason – so in the spirit of not messing with a good thing, here’s a stilton version of Grange Disks 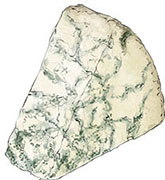