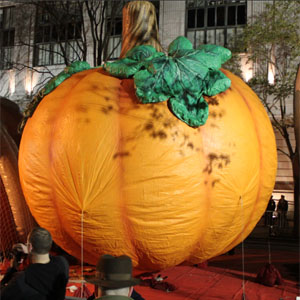 It’s become an absolute Thanksgiving tradition that the night before the parade Jon and I head to the Natural History Museum to see the giant balloons tethered down under nets, ready and waiting to fly.

We shuffle around the block in a swirling sea of people – some of whom – totally insane – bring children in strollers as an added pedestrian menace. We inch past the vast prone limbs of Buzz Lightyear, Hello Kitty and Snoopy. Dora the Explorer lies nose to pavement on West 77th street. 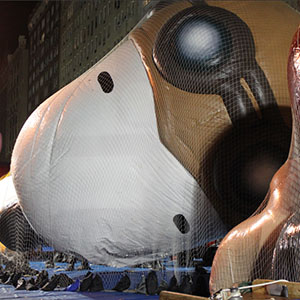 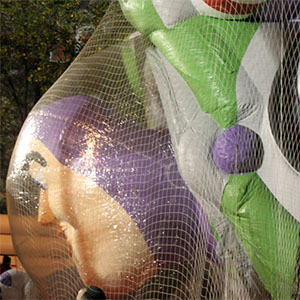 This tends to bring out the Romantic in me. In my mind, toppled Sponge Bob Square Pants is a modern Ozymandias, “Round the decay / of that colossal wreck, boundless and bare, / the lone and level sands stretch far away,” I quote. Jon gives me a straight look. 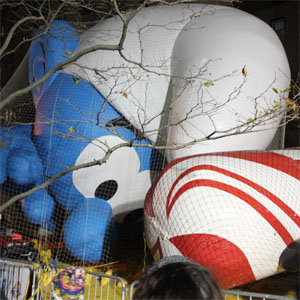 Tomorrow they soar, but tonight, they are captured, netted and beached. All the potential ready and waiting to rise. 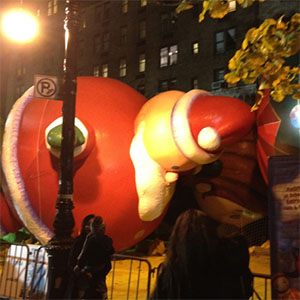 Later, we drink bourbon and eat hot soup, and talk about the things we are thankful for.

My favorite thing about this soup is the cheesy crouton floating on top.

The inspiration for this soup comes by way of an Ina Garten recipe that I read about on Dinner a Love Story – a fabulous blog and cook book, well worth checking out.