Godson Arthur turned seven this week and hosted a fantastic medieval themed party at the local scout hut attired in a sequined tabard with a shield, helmet and sword. One of his cousins came as a dragon. 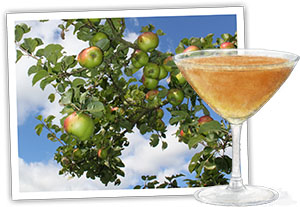 Jon, looking over the photos later, remarked that they seemed very Gulliverâ€™s Travels, with hoards of tiny knights pinning down various uncles, dads, cousins and Sarahâ€™s boyfriend Matt who stands at least 6’2″, to the grass with plastic swords.

In addition to a spot of light jousting and a cake in the shape of a castle with plastic knights stuck into the chocolate icing, the children were entertained by Mr Tickle â€“ basically cat nip for the under 10 set – who performed magic tricks, juggled, spun plates, told jokes and made sweets appear in a covered cake tin with a tap of his wobbly wand.

â€œRiding a unicycle is only really dangerous if you wear a blindfold, so â€¦â€

â€œWear a blindfold!â€ yelled a knowing voice in the crowd.

â€œYou wouldnâ€™t want me to ride the unicycle blindfolded would you children?â€

â€œBut that would be very dangerous, and you wouldnâ€™t want me to fall off would you?â€

It was a thoroughly medieval moment that made my mind turn inexorably to drink.

I first experienced the combination of hot apple juice and vodka at a party for a magazine that I was writing for in Warsaw one cold autumnal night. It was made with the local spirit of choice, Zubrowka, which is a type of vodka with a blade of grass in it which gives the alcohol a slight vanilla/herbal flavor. This vanilla-ness hinted towards a taste memory from childhood of McDonaldâ€™s apple pie filling â€“ very much to be desired. So I amped up the vanilla with some vanilla vodka and have never looked back. Sometimes I take the apple pie idea further by adding squirt of whipped cream to the top and a light dusting of cinnamon.

With the apples, that traditional British pairing; cheddar cheese. Of course you could simply eat crumbled lumps of cheddar as they are, or on crackers, but if the idea of hot melting cheesy pastry appeals to you, then this is a low fuss high reward option.

I cut this tart into squares to serve with drinks, but you could make six small individual tarts by using a glass as a template.

Ingredients (feeds 4 as a main course with a salad, 6 with drinks or as a starter) 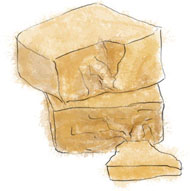