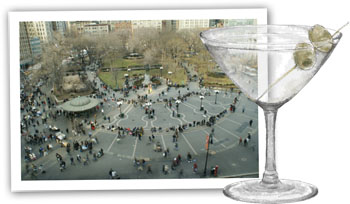 Amazing Grace met a man in the park. Park Man turned out to have a name. His name was Alex. And he took her for a drink, made her laugh, complimented her new red jacket, and said he would call her. And actually did call her. And took her out for dinner, walked her home and kissed her at the door to her building. On the lips!

This, thankfully, is what passes for big news in my life and the lives of my friends, so we met at the Union Square Café to sit at the bar, drink martinis, eat our body weight in bar nuts to dissect every detail of the date.

I can reveal that Alex had normal shoes, so nothing to worry about there, didn’t mention having any kind of weird ex-girlfriend issues, was not wearing a wedding ring and stated categorically that he was not married, was allergic to band aids and liked to watch baseball, but not in an obsessive way.

In a good light and with a little hopeful squinting he could possibly pass for a shorter less muscle-y relative of Brad Pitt.

Sara wondered speculatively if Brad Pitt would be a better lover than George Clooney.

Grace thought he probably would, but that given the choice of actually sleeping with Brad Pitt or asking Angelina Jolie for specific sex tips, she would plump for the latter.

There is no finer way to spend an evening than with a martini, a fist full of bar nuts and discussion such as this.

I’m usually more of a gin martini girl, but when the vodka martini urge hits this is how I like to make them (and drink them).

The Union Square Café in New York makes the best salty-sweet bar nuts in the world. Until proven otherwise by happy experiment. If you get to the bar at 4.45, the nuts are fresh out of the oven, warm and delicious. The recipe is published in The Union Square Café Cookbook, and  featured by Nigella Lawson in several of her books. That said, I’m convinced that there is more sugar and salt in the café nuts than in the recipe, so I add more.  Either way, they’re good.