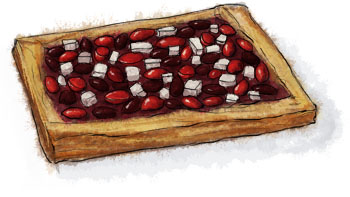 I’m through with winter. I know. There’s months of it to go, and I should suck it up and make the best of it with hearty stews, warming soups, sticky puddings and other seasonal deliciousness, and I will, but for now, I’m sticking two fingers up to the weather and the cold.

I’m living, blissfully, in denial. (Which, being in Egypt, is lovely and warm)

Sara, conversely, is out of denial and into the real world with New Year zeal. Determined to be more pro-active about her (lack of) love life, she sent a much debated and line edited email to the man she accidentally picked up at the office Christmas party. His name was Sean. He worked on a different floor from her, and she hadn’t seen him since he slept chastely on her sofa, made her French toast and left her his number before vanishing into the morning.

She wondered if he’d like to meet for a drink after work sometime.

A day later he emailed back to say that he would.

But here’s the rub; A DAY later. A whole day?! Was he simply off line? But for a whole day – it’s possible, but is it likely? Was he playing hard to get? Was he trying to look cool by deliberately not firing off his reply? Or did he really have to think about whether he wanted to or not? Did he sleep on it and wake up resolved? Which could mean that he’s really sure he wants to meet up, or, it could mean that he doesn’t want to meet up at all, but feels that he ought to – the time delay suggesting extreme reluctance.

These are the cold hard issues of Sara’s real world, which we plan to discuss and decode tonight over dinner in my fantasy world of blue-skied warm-hearted summer, with the help of a bottle of chilled white wine.

This tart is spread with a tapenade / ricotta mixture before being topped with tomatoes, feta and black olives. Tapenade is a black olive, anchovy, caper spread that can be bought in jars in most supermarkets. It can get a bit oily around the top though, and needs a good mix before using.

If you want to make your own tapenade, here’s a blue print: 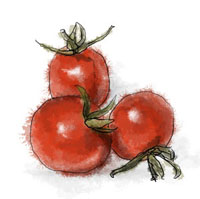