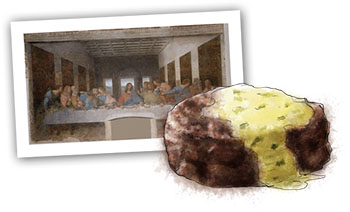 Apparently the world will be ending on the 21st. Itâ€™s not a dead cert by any means, but itâ€™s probably worth eating steak for dinner with someone you adore, just in case.

It was when the particle accelerator at CERN was switched on. The idea was that particles would be shot around a ring the size of half a dozen sports tracks, then they would hit each other and scientists would study the things that exploded out of this collision. The only downside was, nobody could say for absolutely certain that the collision wouldnâ€™t create a black hole that might eat everything around it, including, ultimately, the whole world.

â€œThe world will not endâ€ he said. â€œMathematically speaking thereâ€™s a vanishingly small chance that the world will end.”

â€œBut it’s not actually zero, in fact?! So the world Might end?â€

Itâ€™s just that the more times he said it, the less reassuring it sounded.

So we had a (last) supper party and I asked every guest what they would like their last meal to be, and thatâ€™s what I cooked. It seemed like a good idea at the time.

Sometimes, out of morbid curiosity I suppose, I look at the Florida death row website, which lists prisonersâ€™ last meals. These must cost under $40 and be available locally. And, if you eat your last meal then get reprieved, you donâ€™t get another one. The requests have a ring of tragedy about them; all fried chicken, milkshakes, cheeseburgers, chicken tacos, vanilla cokes â€“ kid food. But lest you start to feel the tragedy too deeply, the website also lists the punished crimes along with the menus. Itâ€™s a disquieting read all round really.

And so, onto what may well be our last meal together if the guys on the subway waving banners are to be believed â€“ and, frankly, when has going with the opinion of random poster-wavers on the subway ever not worked out?

Weâ€™re going for fancy steak here â€“ filet mignon â€“ after all, what with the world coming to an end, expense doesnâ€™t seem like it ought to be a top priority. And should the world not end for some reason, this is a seriously elegant treaty steak, ready for romance.

Nowâ€™s a good time to make the sauce:

Yes, this is one of those supposedly tricky butter sauces. Itâ€™s a classic and thereâ€™s a technique to it, but itâ€™s not actually tricky to make and people will love you for it. Itâ€™s made in four stages; 1 â€“ make a reduction so that you have a strong flavor base. 2 â€“ whisk in egg yolks while the bowl is over a pan of steaming water. 3 â€“ whisk in lots of butter. 4 â€“ add fresh tarragon.