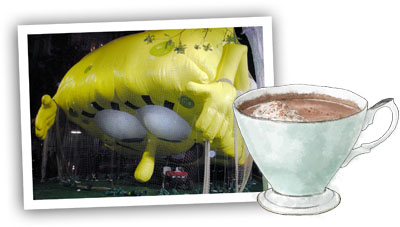 The thing that astonishes me about Thanksgiving is how quickly something becomes a tradition. This will be my 5th celebration of the holiday, my 3rd in New York, and already there are things I have to do otherwise it just wouldnâ€™t be a real Thanksgiving.

One of these things is watching the balloons being blown up for the parade at the Natural History Museum. The first year we lived in the neighborhood we had no idea what was going on. The streets were mobbed with children and people with strollers â€“ a beyond terrible idea â€“ streaming north up Columbus Avenue. The distant bossy ring of a public announcement floated in on the wind. We wandered up towards the action to take a look, got into a grid lock round about 75th street and came home for a drink instead.

A few hours later, curiosity piqued, we tried again. All around the museum balloons the size of small bungalows bobbed inside their nets, weighed down with ropes, waiting to fly. We watched, rapt, as a flaccid clown inflated before our very eyes. We admired a monolithic Dora the Explorer, though we had no idea who or what she was â€“ overheard in the crowd; â€œWho is that?â€ â€œOh, thatâ€™s Dora The Explorer. Sheâ€™s basically crack for the under fives.â€ We took photos of ourselves in the dark with a great hulking Buzz Lightyear. Then, as the lights were turned off and the security guards locked the pathway, we went to a frenetic ShakeShack for a cheeseburger.

Last year we had a plan and friends in tow; starting at ours for drinks, then heading to the museum about half an hour before the end of the inflating to dodge the heaviest child-filled crowds and taking re-purposed Starbucks cups of boozy hot chocolate to sip in the crush. And then we went to ShakeShack.

The vanilla vodka gives this drink an almost cake-ish quality, in the same way that it turns hot apple cider into pie filling.