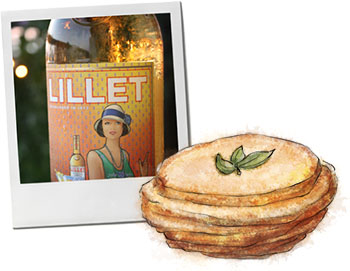 I was running late, very late, because I had decided to re-take up swimming and had severely underestimated the amount of time it would take me to do 20 lengths. Of course I wasn’t wearing my contact lenses for fear they would splash out into the water, so I couldn’t see the clock. Genius.

Harried, damp and disheveled I dashed into the restaurant to find Hilary relaxing with a drink. “I’ll have what she’s having.” It was Lillet Blanca.

“It reminds me of Paris,” said Hilary, who went to the City of Light for her birthday and has a framed menu from her favorite restaurant there signed by the chef on the wall of her living room.

That’s a lot of Paris memory for a drink to evoke.

Lillet Blanca, established in 1872 no less, is a golden citrusy aperitif wine that’s made near Bordeaux. It’s the magic ingredient in a vesper cocktail, but it’s also perfect just the way it is.

Pommes Anna are generally thought to have been the invention of Duglere, a pupil of Careme (the French celebrity chef du jour) at his restaurant Café Anglaise. He never revealed who the eponymous Anna was – there were several possible candidates.

This version was suggested to me indirectly by Hilary, who both made me Pommes Anna for dinner one night, and then bought me the Martha Stewart Hors d’oeuvres handbook for my birthday last year. In this book, Martha suggests “Pommes Annette”, Pommes Anna constructed in a muffin tin into mini bites. Since this is the way I habitually cook rosti, it all made sense to me.

4 Responses to The Wednesday Tipple – Lillet Blanca and Pommes Anna