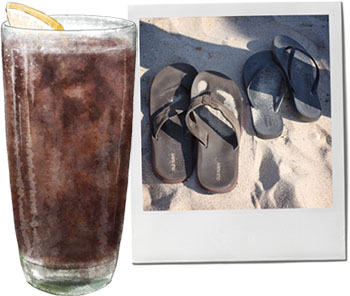 If you are lucky enough to have a friend who has an uncle who has a house in the Hamptons, then there are certainly worse ways to spend an afternoon than floating around his pool on a noodle, and gossiping with friends. 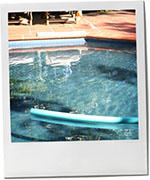 Later, before taking a walk on the beach, someone had the bright idea of filling up take away ice coffee cups with cocktails.

John N sat down on the sand. “I’m shattered. I cycled today,” he said. It’s true, he did, as part of his general training for triathlons / liking to look ripped thing. “I’m not walking anywhere.”

The rest of us set off up the sand, chatting to people as we passed. I collected precious stones and shells, Jess played with the soft lens on her new camera, we paddled in the cold water, 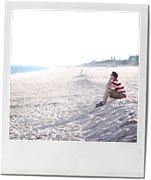 threw a stick for a friendly dog, and then we walked back. In the distance we could see John. He appeared to be meditating, listening to the ocean, watching the sun set glitter and dance on the water.

On closer inspection, it turned out he was playing Angry Birds.

That this made us all laugh hysterically for several minutes, is a tribute to the strength of the cocktails.

Long Island Ice Tea – what else? (makes a pitcher – about 6 drinks)

My friend Euan who loves cola inordinately, introduced me to Long Island Ice teas in pitchers in that strangely soulless bar by in the cinema complex in Kingston. A glass or two later, it had some soul.

It’s a very satisfying drink to make because it uses pretty much every bottle of alcohol on the shelf. Also, it looks like strong ice tea / weak ice coffee if you’re drinking it from take out cups on the beach. 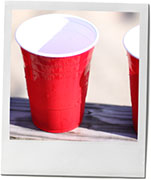 People will eat as many of these as you can afford to give them. I think 4 inch long shrimps per person is a kind of minimum. You’ll also need lots of napkins.
I tend to buy them already de-veined and prepared at Wholefoods. I take them home, rinse them, and keep them in the fridge until I’m ready to cook them.

24 inch long shrimp
1 1/2 tbsp butter
1/2 tbsp pesto (fresh from a supermarket – not in a jar, or make your own – it’s really easy)
1/2 lemon (and more lemon to make lemon wedges)
1 tbsp vermouth or white wine
salt and pepper