This Dinner Will Get You Laid – Imam Bayildi, the priest wept 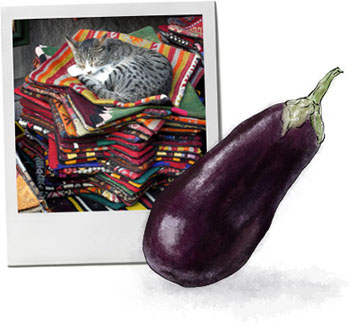 Imam bayildi is one of the all time great, most delicious ways to eat aubergine / eggplant.

The one thing these stories have in common, apart from the titular priest, is olive oil, of course. It’s what makes this dish so delicious. And we’re all just going to have to get over the fact that there’s such a lot. 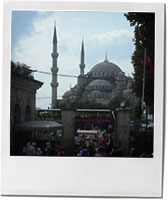 I’ve written before about the romance of Arabian Nights style dinners – definitely a state of mind rather than a geographic region. I happily range from Silken Samarkand to Cedar’d Lebanon, decking out my apartment with tea lights in colored glasses and scattering rose petals on the table. This dinner, however, is authentically Turkish. Straight from my recent cookery school day in Istanbul. And it’s the perfect thing with which to woo a vegetarian or vegan.

It’s easier to buy medium sized eggplants, slice them in half, then scoop out a hollow with a grapefruit spoon into which, the onion tangle will be stuffed. But the fancy way to do it is to buy small eggplants, then hollow them out like a canoe using a combination of cutting, scooping and pressing the flesh in with your fingers. They taste the same as far as I can tell from pretty extensive testing all over Istanbul.

Here’s a very satisfying tip that I learned: cut into the stalk of the eggplant with a paring knife until you feel the hard core in the middle. Then cut round, twist and pull the green off to reveal the stalk. Why do it? I’m actually not sure, but every time I ate eggplant in Istanbul, that’s what had been done to the stalk, so my best answer is; it’s traditional. It just looks more authentic, that way, so that’s what I do.

Imam Bayildi (serves 4 – eat two on your date, save two for lunches during the week)

This recipe comes from the print out that I was given at the cookery school, and it’s so similar to Claudia Roden’s in Arabesque, I expect it’s either the same, or from the same Turkish Grandmother source. 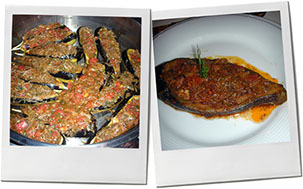 This entry was posted in This Dinner Will Get You Laid and tagged dill, eggplant, Istanbul, lemon, mint, olive oil, onion, parsley, romance, tomato, turkey, vegan, vegetarian. Bookmark the permalink.

4 Responses to This Dinner Will Get You Laid – Imam Bayildi, the priest wept