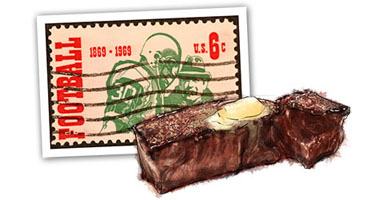 Even among people who generally couldnâ€™t give a damn about football. Even among my friends who obsess over things like organic quinoa and sample sale-ing. EvenÂ amongÂ my friends – alright – one friend specifically – who thought The Giants wereÂ a baseballÂ teamÂ – the concept of Superbowl resonates.

Both because it’s Superbowl and there’s a home team to support, but also because it’s pretty much illegal Not to be eating Doritos and dip for four hours.

I recently learned some fascinating food facts about Superbowl. Apparently we’re going to be eating 4000 tons of popcorn. Think about how light popcorn is for a moment. Yeah. That’s a lot of popcorn. We’re also going to get through 14,500 tons of chips and a pretty staggering 70 million pounds of avocados, mostly turned into guacamole for dipping purposes.

This kind of ridiculous over consumption makes Superbowl the number 1 eating holiday in America. But, with the best will in the world, turns it into an objectively terrible date night.

So, for the night before may I suggest this classic strip steak?

Look for a good quality steak thatâ€™s at least an inch to an inch and a half thick. Itâ€™s going to stay nice and juicy, which is what you want here. Youâ€™re also looking for fat thatâ€™s nicely marbled through the meat, not all in one thick line cutting the meat in half. I look for 6 â€“ 8 oz portions.

This entry was posted in This Dinner Will Get You Laid and tagged football, New York Strip Steak, steak, Superbowl. Bookmark the permalink.