The Wednesday Tipple – devils on horseback, some in a suitcase, and frozen cantaloupe martinis 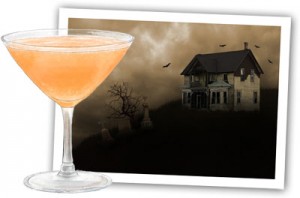 “Can I take a look in your purse?” asked the security man outside Ricky’s. I’d been on a quest for glow in the dark vampire teeth to send to godson Arthur (what else?), but was leaving empty handed. Nevertheless, a bag inspection was required, so I unzipped and subjected a wallet, a bunch of keys, 3 lipsticks, 2 lip balms, a blackberry, an i-pod, a note book, 4 pens, a nail file, and a pink plastic banana holder to scrutiny.

“Sorry, but I gotta do this,” the security man apologized as he poked about with a mini torch. “The other day we had a guy come in here and steal 900 bucks worth of stuff. 900! He went in wearing this big grey jacket and came out in a t-shirt wheeling a suitcase. No word of a lie. Full of Halloween costumes. Full. 900 dollars. Of costumes. So I’m standing there looking into this suitcase thinking, there’s just me on the door. This is the time you’re gonna want to start running, then I gotta pick; the costumes, or your ass. And he doesn’t know this, but I’ve got a bad foot, so …

But he just stands there and says; “Oh these? These costumes? These are mine. I bought them in this other store. These are mine.” It’s lucky we got cameras. That’s all I can say.”

He sighed a disappointed sigh, shaking his head much as Napoleon might have done, surveying the snowy wastes of Russia while his Under-General swore that the weather forecast that morning had promised light to moderate breezes and sunny interludes.

“I know it. Stealing Halloween costumes. That is Not the spirit of the holiday.”

“Exactly,” I joked, zipping up my bag. “The spirit of the holiday would be vodka, no?”

He looked at me balefully, the imperfections of the human condition weighing heavily upon his shoulders.

I went home and had a drink.

Devils on horse back

It’s traditional to stuff the prune with an almond, but I’m always a little freaked out eating them, thinking the stone’s been left in.