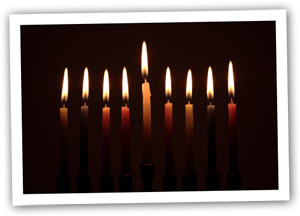 Last Hanukkah our friends Ingyin and Yosi cooked us the greatest latkes in the world and then promptly moved to Abu Dhabi to set up the new NYU physics department. Just the two of them and a whole bunch of undergraduates in the middle of the desert. Which is rather heading into Lord of the Flies territory. In any case, they left and took their latkes with them.

So this year, if we are to celebrate the Festival of Lights, we must do it on our own.

If Iâ€™m in the grating a potato business, Iâ€™m always going to be making rosti rather than latke, (more crunch and no deep frying) so the plan is to make these, but top them with lox rather than caviar and have them with drinks before going out to Lanskys for brisket. And then, inspired by my experiences in Poland, and mindful of the apple mountain that shows no signs of diminishing no matter how many apples I eat and cook, Iâ€™m making apple pierogi.