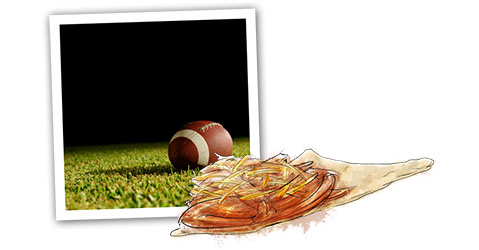 This yearâ€™s game is a rematch of the one Jon and I watched years ago in the small hours of the morning in a fairly faceless businessman-type hotel bar in Warsaw, with plenty of strong Polish beer, and a grassy garnish of dill all over the nachos. I won some money – 50 bucks â€“ something like that, betting on a New York victory against the odds, and, delirious with success and junk food, I danced to Europop until the hotel cleaners arrived for their morningâ€™s work and kicked us all out.

Who knows how Sunday could turn out. Though odds on, less dill and less Ace of Bass this time around.

So in the spirit of Americaâ€™s biggest eating holiday of the year, may I suggest this spicy cola chicken?

That fact pretty much stands alone.

Slow cooking turns the drink into a surprisingly complex BBQ-style sauce, and the chicken becomes the texture of pulled pork. Itâ€™s important to use cola rather than diet cola. I tried it once and the chicken came out tasting of chemicals.

I like to turn this chicken into a nacho topping by adding any or all of the following: 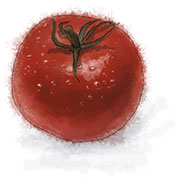 But it makes a delicious sandwich â€“ possibly with a side of coleslaw, and it makes a fairly obvious wrap / burrito / taco filling too. Leftovers can be turned into a great soup – add to a batch of tomato sauce thinned with stock, then add some drained rinsed canned black beans, a spoonful of sour cream, a lot of fresh lime juice and a sprinkling of cilantro.

6 – 8 chicken portions, bone in if that’s how you bought them, out if not

1 can cola
1 small can chopped tomatoes
Â¼ cup ketchup
2 cloves garlic
1 onion
Nachos (about 2 bags)
1 tsp chili flakes â€“ to taste, depending on how spicy you like food and how hot your chili is. I use sambal olek Korean chili paste, and I use about Â¾ tsp for a spicy kick
Â

Thereâ€™s a restaurant near where I work called Rosa Mexicana. It specializes in frozen pomegranate margaritas and nachos with guacamole. It’s basically awesome. So committed is this restaurant to avocado freshness, that it employs a guy to wheel around a specially designed trolley, and make guacamole to order in a huge and impressive stone pestle and mortar. Somedays I find myself sitting at my desk fantasizing about chucking it all in and becoming a guac trolley woman, but thatâ€™s for another day.

Guacamole is controversial. Firstly, it contains one of the most controversial herbs in existence â€“ people either love or hate cilantro and thereâ€™s nothing to be done about it. And people have strong opinions on tomatoes versus no tomatoes, onion versus spring onion etc, depending on whether theyâ€™ve been on holiday to Cancun recently, and what was served in the hotel bar.

I like de-seeded tomatoes, light oniony tang, lots and lots of lime. Plenty of salt. Adjust accordingly to your taste.