The Wednesday Tipple – lemonade with thyme lemon syrup and patriotic ice cubes, and teenage oppression at the Liberty Bell 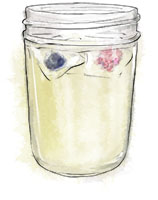 Jon and I arrived in Philadelphia on a sunny Saturday.Â We sat on the top deck of the tour bus digesting our cheesesteak sandwiches, and watched selected highlights of the city glide past in the sunshine. â€œHereâ€™s Betsy Rossâ€™s House. In addition to sewing the first American flag she outlived 3 husbands, so as you can imagine, she was one busy lady!

â€œAnd here we are at the mint, which is one of only 4 coin producing mints in the United States. You can tell if the coin in your pocket was made right here in Phili because it will have a P indented into it. Pennies are the most expensive coins to produce, costing 2.75 pence each.â€

Drama was occurring at the Liberty Bell. As we shuffled round the poster boards that told the story of slavery and womenâ€™s suffrage, we could hear a high keening moaning. The source was a tweenage girl slumped against the wall.

â€œYou donâ€™t understand me at all! This is sooo unfair!â€ Stamp, stamp, weep, weep. â€œLiberty? You call forcing me to go to a museum at the weekend Liberty?!â€

It was time to sit in the park with a cool drink. 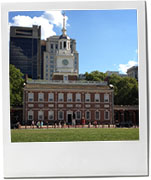 The proportions are whatâ€™s important for lemonade. For every cup of lemon juice you want 3 cups of water / soda water, and Â¼ to Â½ cup sugar syrup to taste. 6 big lemons = about 1 cup of juice 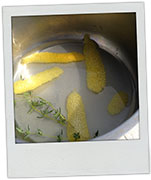 For the ice cubes 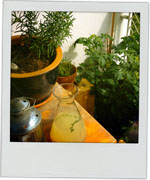