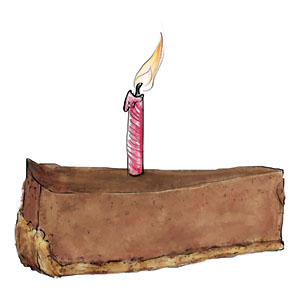 â€œIt seemed like it would be a top romantic gesture at the time,â€ explained the man I sat next to at an especially lovely dinner party in Soho the other week.

â€œI heard that the groom is supposed to give the bride a present on the wedding day, and I really wanted it to be a surprise. So I put a lot of thought into it, and this is what I came up with.â€

â€œSo the first problem was it couldnâ€™t be a total surprise at the wedding itself, because we had to practice holding the doves to make sure we didnâ€™t kill them. If you hold them too low down, you can break their wings and suffocate them, too high up, and you can press on their hearts and send them into cardio arrest. Basically it was more pressure than I was expecting.

â€œSo itâ€™s the morning of the wedding, sheâ€™s having her make up done, and Iâ€™m all SURPRISE! DOVES! And she gives me a look and says; That really IS a surprise â€¦

â€œSo we get to the end of the ceremony, and the photographerâ€™s in place, ready for the dovesâ€™ big moment. And Iâ€™m holding the dove and suddenly I realize, the dove is not moving. I start to really panic â€“ did I break it? Is my first symbolic act of marriage going to be throwing up a dove only for it to plummet back to earth, stone dead?

â€œUltimately, it was fine. It flew away.Â  But as wedding day romantic gestures go, it might not have been my best thought out plan. Basically, I wish Iâ€™d gone with jewelry.â€ 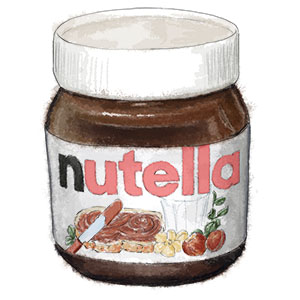 If you are a Pinterest person, youâ€™ve probably already seen a multitude of Nutella Cheesecake recipes out there. Nutella is to Pinterest what Bacon is to Brooklyn. Anyway, this recipe is mostly adapted from a Nigella Lawson one â€“ I think itâ€™s probably in her new Italian cookbook, which Iâ€™m going to buy myself for my birthday â€“ with a little bit of added Pinterest inspiration. Itâ€™s really easy to cook â€“ an assembly job really – and got raves from my friends when I made it back in the summer.