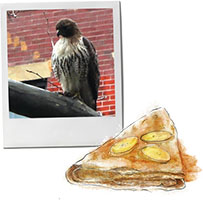 It was a perfectly ordinary Saturday â€“ coffee, grocery shopping, manicure â€“ until the hawk showed up. Soaring down from the sky to perch in a tree opposite Morton Williams.

People stopped to stare at the enormous bird as it preened a little and bobbed its head as though dancing to an internal soundtrack of Walk like an Egyptian.

Incidentally, I have a friend who makes a conscious effort every morning to set a soundtrack to his day. The actual music can vary, though mostly itâ€™s the theme song from The Magnificent Seven. â€œI am the star of the movie of my life,â€ he says. “You are a supporting player or maybe a featured extra – it’s hard to tell at this stage. Ask me again when we’re 60.” In spite of this, we are friends.

Meanwhile, back at wildlife central, quite a crowd had gathered. â€œAre you looking at a celebrity?â€

We marveled, capturing the bird on camera phones, as it did, well, basically, nothing. Out of nowhere, two women appeared with the kind of telephoto lenses most usually associated with catching naked celebrities sunbathing on private islands from distant motor boats. They clicked away as feathers ruffled in the wind.

â€œIâ€™m boredâ€ said a kid after a few minutes of this.

â€œHave you any idea how rare it is to see a red tailed hawk in the middle of Manhattan?â€ admonished his Mom. 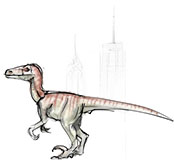 And then a taxi back fired, the hawk opened his magnificent wings and soared back into the sky, wheeling up past Subway, up over Washington Square Park, and away.

In my mind this recipe fall somewhere between pancake day and Mardi Gras â€“ traditional bananas foster meets French crÃªpes â€“ a kind of banana rum crÃªpe Suzette if you will. They are especially good served with vanilla ice cream