This dinner will get you laid (if you actually get to eat it) – Risotto and the weekend that never was. 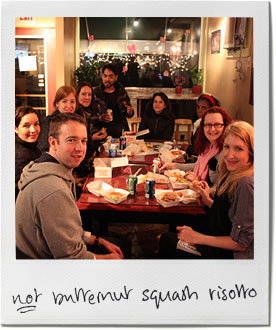 It was my friend Johnâ€™s birthday and the plan was that 10 of us would drive to Woodstock and hang out in a house on Friday night, Saturday, have breakfast on Sunday and get back to the city in time for the Oscars. That was the plan.

Jess hired the car. Husband Jon made the play list. I baked the brownies. Kim had the route all worked out. We collected Wendy who brought a sack of herbal popcorn, which tasted almost as suspicious as it sounded, and set off into the traffic.

Now weekends in houses outside Woodstock require preparation. Iâ€™d made the component parts for butternut squash risotto for 10 (Fridayâ€™s dinner), and had trays of roasted squash, and tupperwear boxes of caramelized onions in the trunk ready to go. We had gallons of milk. 60 eggs. Sacks of apples. 4 bags of spinach. And a bottle of agave syrup, which apparently counts as a weekend essential if youâ€™re from Manhattan. The trunk of our car looked like a franchise of Whole Foods. It was going to be great.

Jess, game for anything, attempted to scale it, revving up the Chevvy and hoping for the best, but after 10 feet we slithered back down again wildly out of control, and after the second attempt we begged her to park up and consider a plan B.

â€œHow long is the driveway?â€ we wondered.

I nominated husband Jon to head up on foot and find out.

It was pitch black. The tarmac headed upwards before curving off into the woods. Our cell phones didnâ€™t work. Somewhere in the distance something howled.

And that was the last we heard from him.

The other John arrived in an SUV.

He would mount a rescue mission to find the first Jon. But not in the car. Because a lack of snow tires and chains suggested a future wrapped around a tree. He too headed up the dark and icy incline, his useless iPhone the only light.

But Jasen can press half a ton in the gym using his legs, and is made of stern stuff, so he set off ruggedly in the pale blue light of his blackberry.

We waited in the dark.

We ate the brownies.

And then, slipping and sliding all the way, the men returned bearing the sad news that ascent was impossible, and we should head back to the city.

We stopped at Kennedy’s Chicken joint in Nowhere New York, to eat sandwiches and something deep fried with jalapenos in it, and to toast Johnâ€™s birthday in Pepsi, and then we drove back, full of our adventure â€“ city folk, thwarted by our brush with the countryside.

And though we celebrated over the weekend, most notably with chocolate cake and brunch, the butternut squash remained un-eaten. Enough roasted butternut squash to feed ten people. So this has been a week of butternut squash for Jon and I. In pasta, in soup, and lastly, in risotto. 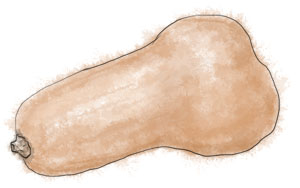 This entry was posted in This Dinner Will Get You Laid and tagged butternut squash, pasta, risotto, soup. Bookmark the permalink.

11 Responses to This dinner will get you laid (if you actually get to eat it) – Risotto and the weekend that never was.